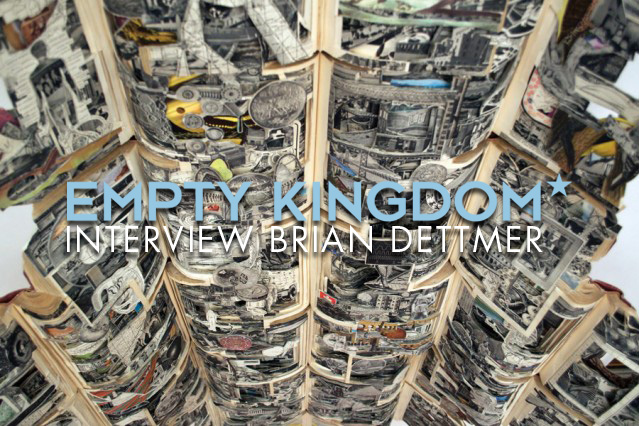 Brian Dettmer is worried about the future of physical information. As we continue to trek toward an era solely dependent on digital content (if we already haven’t), we begin to lose sight of where its emotional / original source came from. Fortunately, Dettmer’s book-sculptures resonate as individual beacons to a past medium we should never ever discard.

We were able to do a bit of Q & A with Brian in order to unveil the heart behind his work. Behold the fruits of our labor. 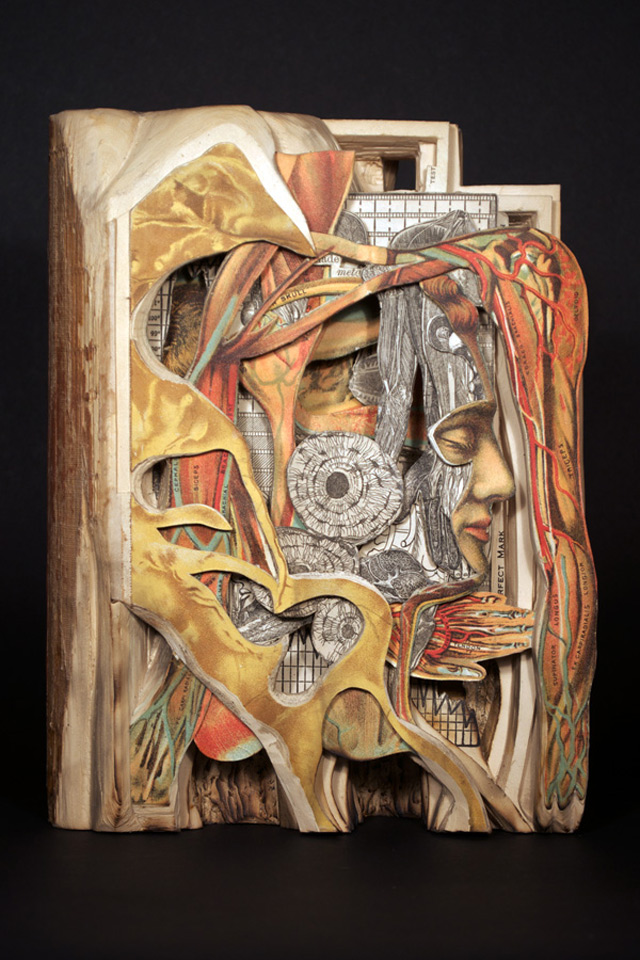 Thank you for taking the time to do this interview, much appreciated. Let’s start off with a little introduction of yourself.

My name is Brian Dettmer. I’m originally from Chicago and currently based in Atlanta. My work mainly deals with books and older forms of information technology.

What was it that made you get into the dissection of books?

When I was in school I was focusing primarily on painting. I was working at a sign shop at the time and was interested in the dichotomy between language and the information it contained. Most of my work dealt with codes and other language systems, obscuring and revealing ideas in text through different systems. I began to rip up newspapers and then eventually books to apply the text to the surface of the canvas. I felt guilty about ripping up books but was intrigued by the texture and history of the material at the same time. This made me think about the position books are in and question their future. This is when I began exploring the book itself as my primary material and subject. 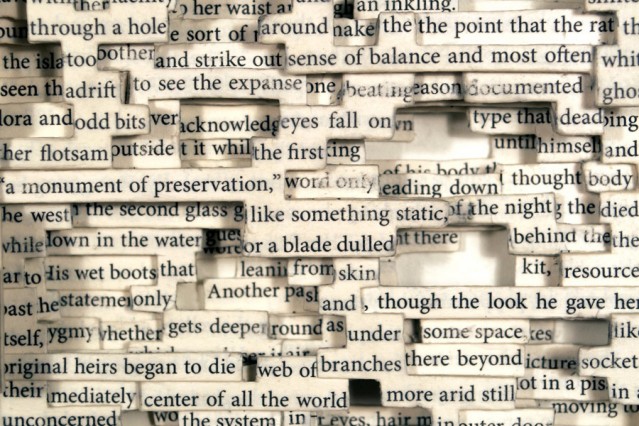 All your pieces seem to resonate their own individual tune. Was there any particular project or book-carving that meant more to you personally than the rest?

I don’t think of my work as autobiographical but they all become very personal while I am working on them and they are loaded with personal ideas and inside jokes. I get to know the book and collaborate with the existing material so I never feel completely responsible for the final work and although I am extremely close to the material while working, I try not to get attached to any specific piece.

How do you go about obtaining the books you need? Any interesting scenarios?

If I know exactly what I want I can go on Ebay or another used book site and buy something online but if I’m fishing for a type of book this backfires more often than not because its very hard to select a book without having it in my hands and knowing it will work for my process. I go to a lot of garage sales, resale shops and vintage bookstores and a lot of people donate books to me now. I have a favorite local vintage bookstore and they got to know me from coming in every few weeks. I would tell them I was a designer and I used images from old books in my artwork. Other times I would tell people I collected old reference books for an interior designer. I tried to keep it at that point to not offend or interest anyone too much. I live in Atlanta and the AJC wrote an article on my work which included a large image of myself on the cover about a year ago. The next time I went into my favorite local vintage bookstore one of the owners said “see, I told you, that’s the guy”. I was busted. Fortunately they we’re really interested and have been very supportive of what I do since then.

Although stated on your site, could you further explain the thought-process behind your page-by-page surgery? For instance, do you scan through each book to figure out what to anticipate, or is every turn a new and unplanned discovery?

Other than making sure I am interested in the book’s subject and content and that the images, design and paper type will work well, I don’t plan any specific images before I begin. I try not to know the book too well so that the discoveries happen while I’m working and not ahead of time. Sometimes I will flip through and see an image and think “I hope I come across that while I’m working”. Sometimes that works, sometimes I completely forget about it and sometimes it doesn’t work by the time I get to that page. 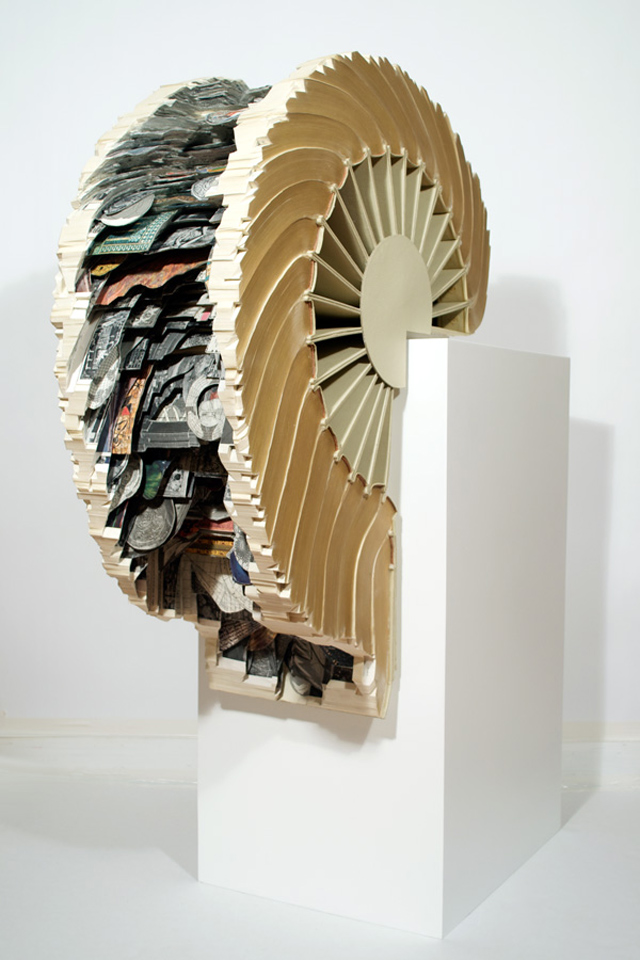 You mention the idea of physical stability falling into digital distress on your site’s Statement section. With this new flood of portable e-reader technology (a weird type of tangible-intangible hybrid), do you feel like this is another nail in the coffin, or something much worse perhaps?

I don’t think fiction books will ever die even though the numbers may decrease as more books become consumed digitally. But, I have thought non-fiction and reference books are losing their role and we now see it with the recent news that Encyclopedia Britannica will stop printing the book version of the encyclopedia that they had been printing for over 244 years. The problem with e-readers, like with any computer or digital file, is that it will require constant upgrading and converting of the files in order to keep them from disappearing. It’s driven by capitalism and longevity is the enemy of this system. Do you want all of your books to disappear by the time your kids can read them or do you want to be able to hand them down or even reference them yourself 10 years from now. It might be online, but there is no substitute for the real. I’m already tired of copying and reloading image files from 10 years ago to every new device I get every year or two. I can’t imagine how taxing that will seem 20 years from now.

As seen in your Saturation Will Result and Tower of Babble sculptures, you seem to specifically choose either tomes filled with images, text, or a mixture of both. How do you decide which is the best form of representation for whatever idea your working on?

I let the books tell me the direction they should go. The original books were designed with or without images because it was integral to the subject and the message it is trying to convey. The content, whether textual or visual, drives the forms and ideas that guide the direction a piece will go in. 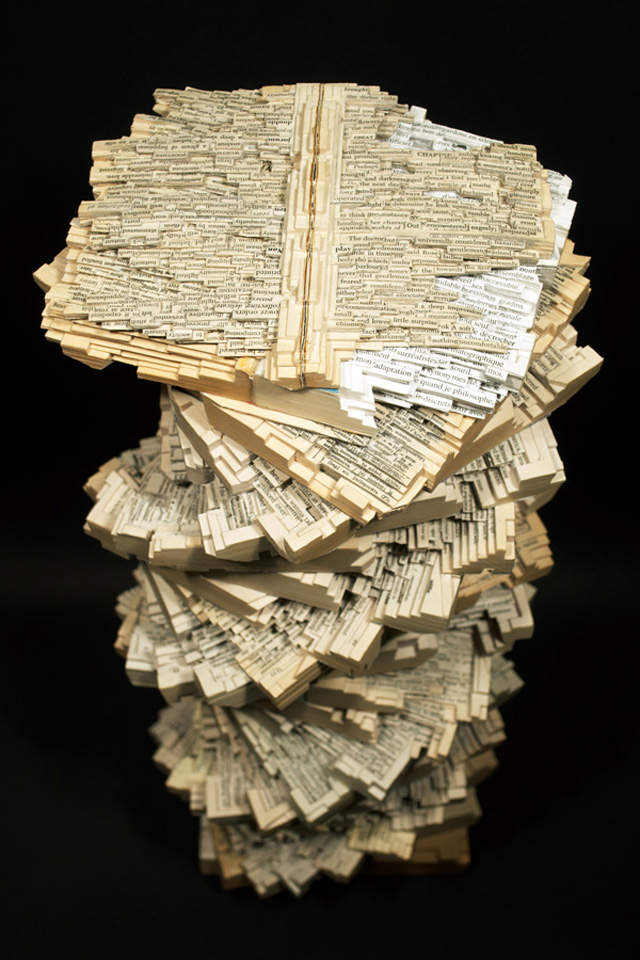 When people see your artwork, what is the main idea or message you’d like them to take away from it?

I’d like them to think about books. What they mean to them personally and what is happening today on a larger cultural scale to books and the information we consume, to think about the flexibility of authorship and authority and the benefits and risks that might impose, to think about the way we experience the internet and life in general, in small unrelated fragments that we are driven to construct into stories in order to extract meaning.

Those are the general ideas. Each work would have another specific series of my ideas but I know once its out there I can’t control the way people will respond and I try to keep the work open enough that people can bring a lot to it and get a lot out of it themselves.

Alright, let’s get back to Brian Dettmer, the person. Do you have any favorite films, TV series, musicians, websites?

Just off the top of my head-

Films- I’m a big documentary buff, and love the films of Werner Herzog. I’m also a big fan of Darren Aronofsky, Harmony Korine, but we have a 2-1/2 old so most of the movies I watch are kids movies and cartoons.

TV- I was addicted to The Walking Dead. I am normally interested in anything post-apocalyptic but this really sucked me in. I think Louie (Louie C.K.’s show) is one of the best shows ever made.

Music- I listen to a lot of music since I’m in the studio every day. Mostly instrumental, often electronic or soft/heavy repetitive- Godspeed You Black Emperor, Mogwai, Tetsu Inoue, Battles, The Books, Four Tet, Caribou… I could go on. I’m a big music fan. 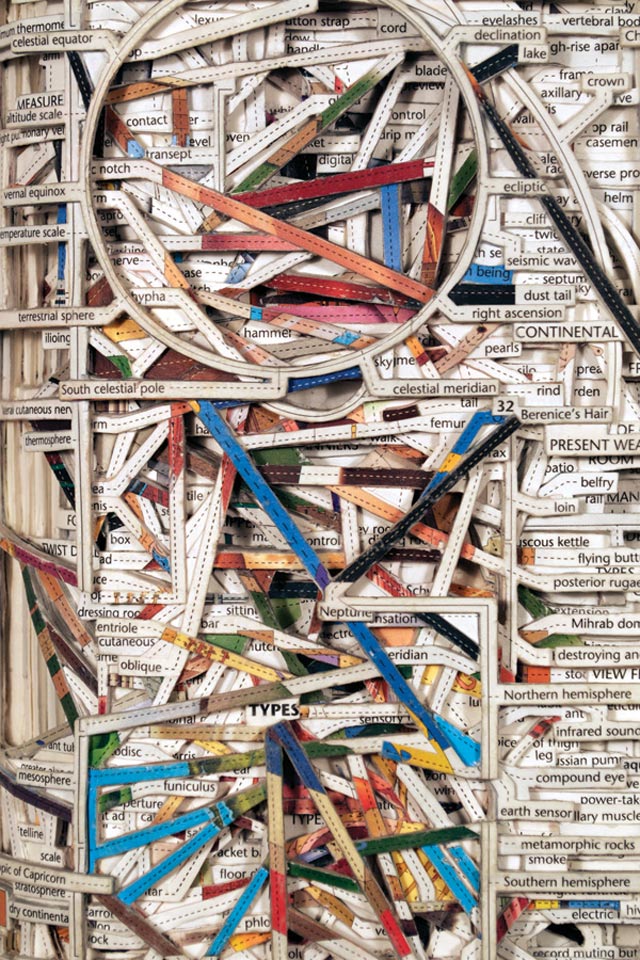 Richard Lewis was in a dream of mine the other night. I don’t know why. I was on an elevator with him and started naming the things I knew him from to him. He seemed irritated and then after I got off the elevator I remember distinctly thinking in my dream that it must be annoying running into people that then tell you what you have done, but a foggy and inaccurate version of it.

Are there any new updates or upcoming projects you’d like to plug?

I have a show opening in April at the University of Maribor Library in Maribor, Slovenia as part of its designation as the European Cultural Capital of 2012. In the studio I have been focusing on work for a solo show opening in October at the Museum of Contemporary Art of Georgia and then traveling next year to the Virginia Museum of Contemporary Art and a few other venues TBD. 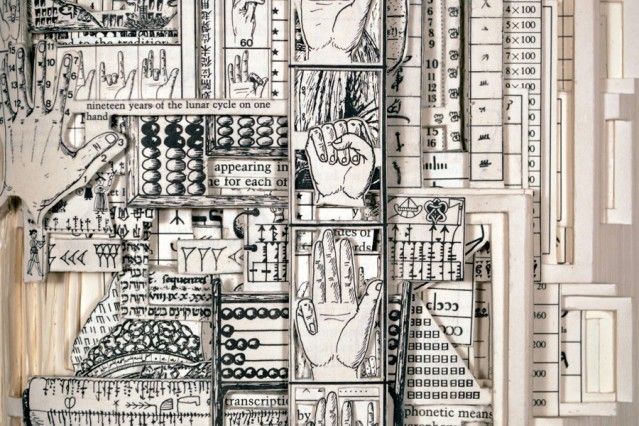 From One to Zero 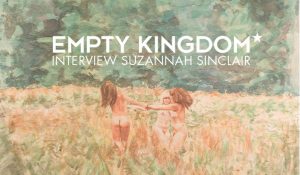 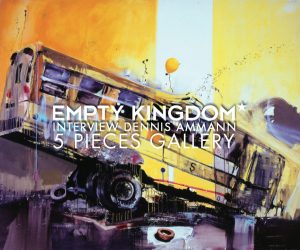