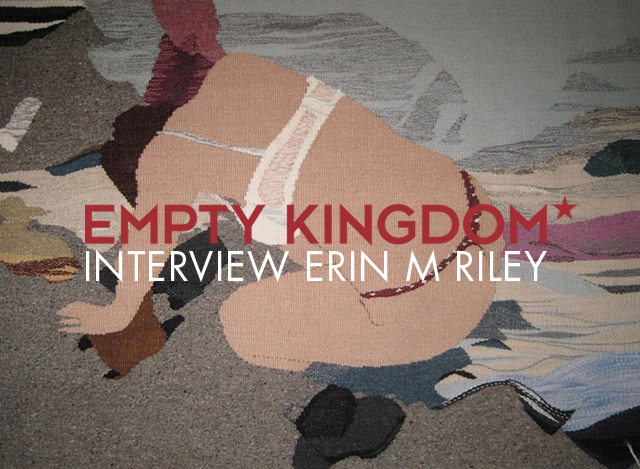 Erin Riley’s work is vibrant, violent, beautiful, sad but above all honest.  She makes tapestries addressing the myriad of issues youth, and particularly women, face and the pain that we go through and sometimes inflict upon ourselves.  Erin Riley will be showing her work starting TODAY at the Extension Gallery – Orchard Skateshop in Boston, MA, so if that’s where you are or will be stop by!

I am Erin M Riley, a Scorpio, a tapestry weaver living in Philadelphia, for now.

Weaving is a very unique medium of expression, how did you choose that?  What about weaving appeals to you?  Do you think the art of the tapestry has declined?  Why would that be?

I found weaving very early on in college at MassArt, it was the first elective I took, mainly because it was a requirement for my major but it quickly became the only thing I focused on. I built my schedule every year around weaving as much as possible, and wove straight through graduate school. Weaving is a tangible skill, and I always like that in the case that art didn’t work out, I can always make “things” like wearables, rugs, and the like. Its an art form that can be capitalized on if needed, it was much less risky than other things. And as a broke ass kid I felt like I always needed a fall back plan because I chose art school and no one was gonna help if I failed. I love work, and I love to work, it keeps my mind occupied, my body is tired after a day in the studio, and weaving is linear so progress is clear, although slow. Tapestry is always being practiced, but tapestry weavers aren’t noticed much. I think that the visual language of tapestry is sometimes stagnant, and hope to create works that are relevant. 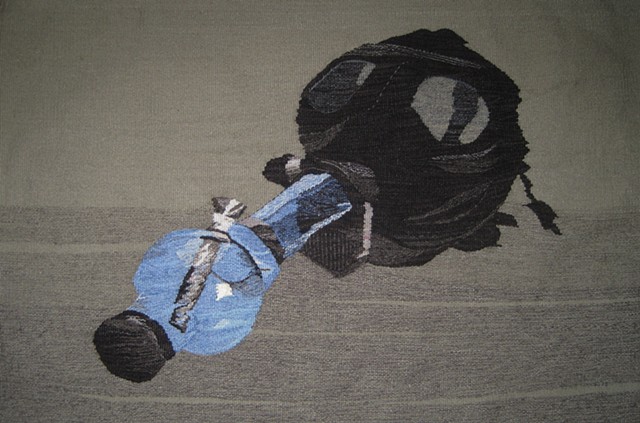 You have a series of tapestries featuring skid marks leading off the side of the road.  I’ve often looked at skid marks and wondered what the story behind them are, what are you asking, or addressing in your pieces?  What personal trait do you think is responsible for your desire to depict such potentially tragic situations?  Is it curiosity at the unknown?  A sense of desire for connection to tragedy in hopes of comfort?  Reconciliation of personal tragedies yet unresolved?  Do you think the seed emotion is even important or interesting when compared to the repercussions of what we do with the emotion?

In my childhood, many people died in car accidents, and these deaths, like many tragic sudden deaths are the points in which I felt the track of my life and the lives around me change. What I find so incredible about the skid marks is how much can be inferred depending on ones experience. I think that expressing and feeling emotions is so important, and these images, like driving by an accident of a stranger, can solicit tears or a feeling of closeness and overwhelming love for the ones around you. A reminder of death, and the empathy for the loss that is soon to be felt. I also weave car accidents, and they are much less emotional because they are so full, there is still the mess, but the emptiness is sometimes what is so chilling about death or loss. 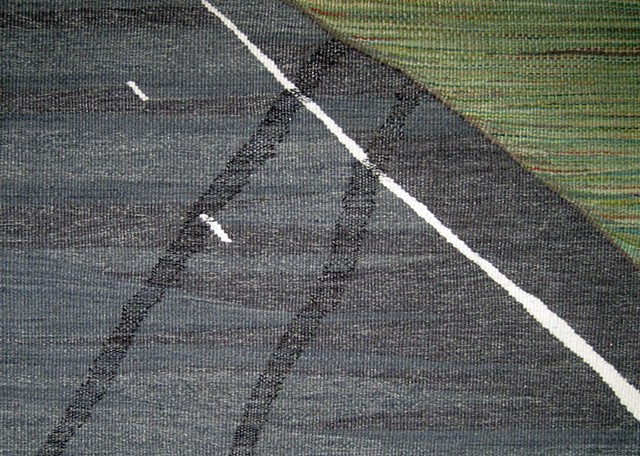 In the ‘text’ tab on your site, you have a quote written about your art.  Here is my favorite part:
Riley weaves her sorrow, her rage, and her accusation into the work and perhaps she directs her response to both the young women who blindly participate in their own objectification and the male-centric culture which encourages them. The work is simultaneously sad and funny, protective and accusatory.
Is this an accurate presentation of you emotionally?  Are you sorrowful, angry and accusatory towards the male-centric, hetero-normative ideals that are prevalent within our society?

There was a while when I was very much saddened by the debauchery that I was weaving, feeling as though the women were victims of the society, falling in their own messes, exploiting themselves and responsible for the Internet exploitation, etc, etc. But now I am coming to my work in a much more loving way, I can embrace the vulnerability of the young women I weave and relate to it in different ways. This summer I wove a bunch of nude photographs of myself, using images that I might send to lovers, and after that experience I feel much more on the same level as my subjects. 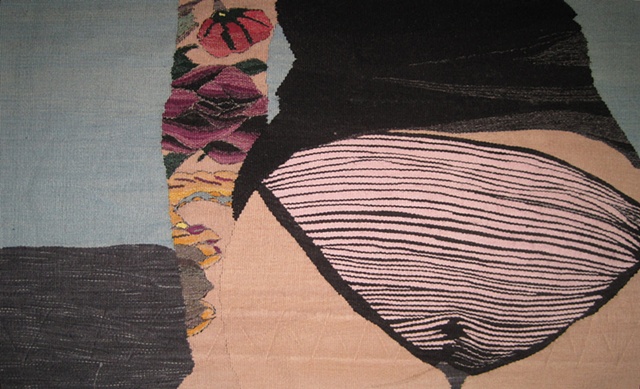 What do you think women can do, and men too for that matter, to contradict, battle and break down the prevailing ideals?  You are actively doing so with your work, there is a question in each piece, but do you think you’re doing enough?  What else would you like to do or are you currently doing to contradict the ideologically constrictive society that surrounds us?

One main thing I hope that my work will convey is that all women are beautiful, complicated, sexual, strong, etc.. Much of my childhood, growing up with two sisters and a mom was spent criticizing females for one thing or another. I never had many girl friends because of societies delusions of this competition towards men. The longer I am single, I realize so many issues amongst women are based on insecurities and thoughts that have no real merit, because in the end so much of dating is crap. And if we spent more time working on building each other up, we might have higher standards in men, expect much more out of sex, and be much more stable in the case a relationship didn’t work out. I also am trying to be more accepting of ladies who go down the road of mom, wife, long term gf, etc. hoping that they require equal sacrifice of their man/partner. 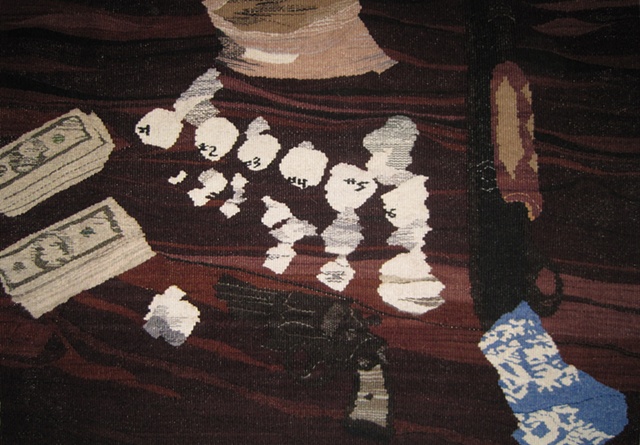 There’s a song by a band called Flume called Insane: http://www.youtube.com/watch?v=peRS3KGNxoY
The song isn’t what one would call lyrically diverse by any means, but it is particularly hypnotic in the repetition of the phrase: “The only risk is that you’ll go insane.”  I think this could be applied to society at large, there are many people who play it safe and choose not to go down ideological paths that may challenge or even destroy their comfort zones.  How have you personally pushed the bounds of your own perception?  Why have you decided that the end gain is worth the risk of going insane?  What do you think is one of the most insane facets of prototypical society?

I rationalize a lot of the risks in my work by saying that I don’t mean to offend anyone, so if I do at least I am coming from a “nice” perspective.  This summer  I made the most sexy, or nude, or “rude” work yet, and pushing stuff really far allows you to float around comfortably in the middle for a bit. I felt rather insane this summer, I was living in my studio without a shower or a kitchen, in 90 degree days, weaving everyday, existing in my own head, making work that might freak some people out. I had someone tell me that depicting sexual imagery might make people think that I am a hussy, or lewd. So many people are trying to fit into a mold, and me weaving girls with cum on their boobs is not fitting into any mold. Documenting sex acts and weaving used condoms, presenting images of my ass or vagina as tapestries, I might be crazy, but I don’t think that’s a bad thing. But I also could never have expected this would be the work I would be making. 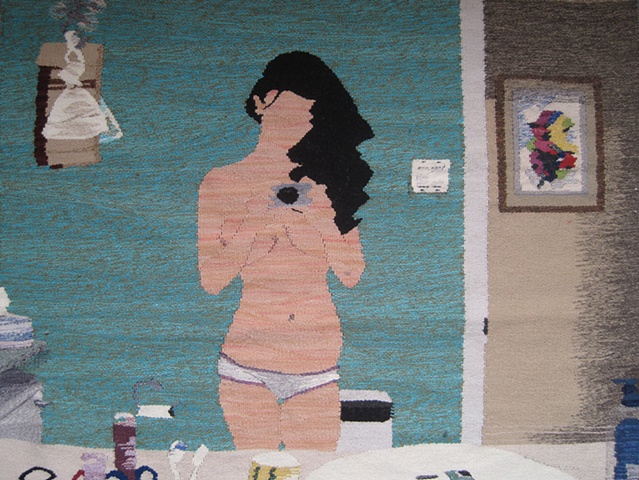 Tell us about your show on December 1st, where is it?  What pieces are you showing?  How has your work been received at previous shows?  What have been the best and worst responses you’ve seen to your work?

My show Crush opens December 1st (from 8-11 pm) and is up until January 7th in the Extension Gallery at Orchard Skate Shop in Boston, MA. I am showing a bunch of new work, its mostly pretty and girly, but there is some gruesome stuff like girls with bloody noses, bloody hands, and a girl passed out with a beer in her hand. It will be my first show of a body of work in Boston since 2008, and I am interested to see what people I know think of my new work. I have had mostly positive responses to my work, I think in many cases people are into the medium and like seeing the different images I present. I have had weavers say that my tapestries are a waste of time and wonder why I take the time to weave what I do, and I have had people who are pretty into my work. It generally depends on the audience.< 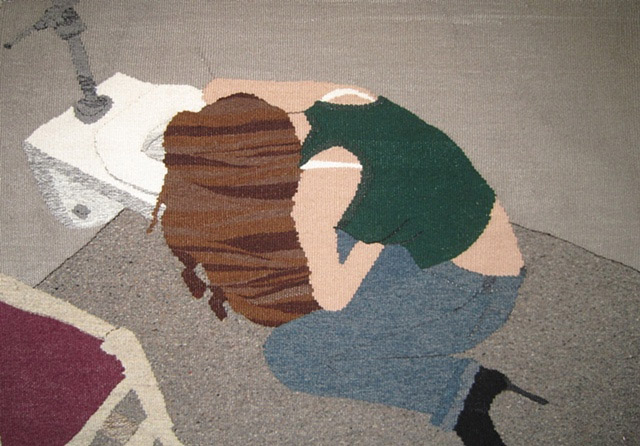 From someone who has chosen a very different medium of expression, what advice would you give starting artists looking to find their voice, their own medium, and the way of telling the stories that they want to tell?

I guess sometimes your own life and stories seem so dumb and trivial, but in the end they are the things you know the most about, starting from a place you care about is cool. In grad school people kept telling me they were sick of hearing about the things that tore me up inside, but now that I am out of school and making art on my own these are the things that keep me making art everyday. The images and subjects that I obsess over are eventually woven.

What’s the best kind of candy bar and why?

As a vegan, I don’t have many candy bar options, I am much more of a skittles or sour patch kids kinda lady. 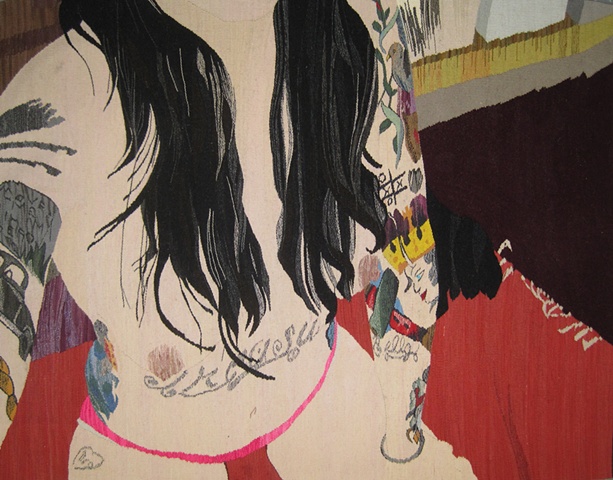 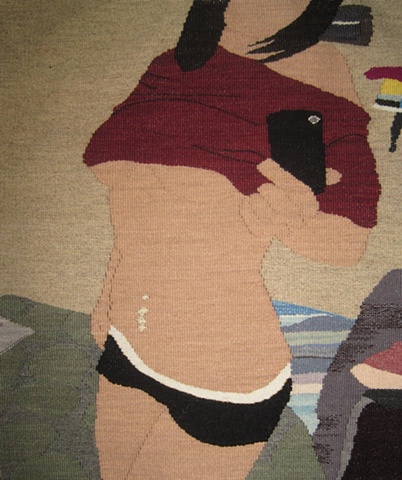 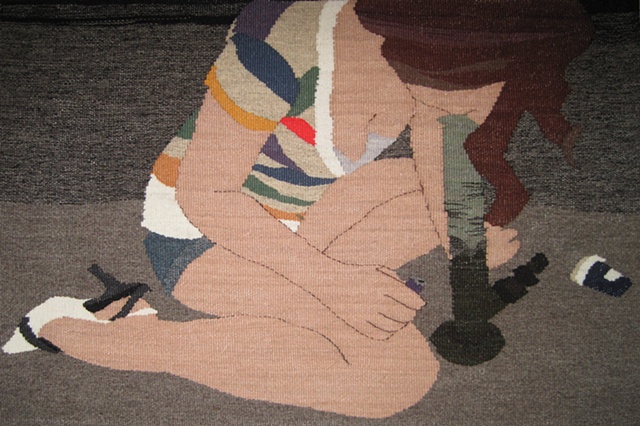 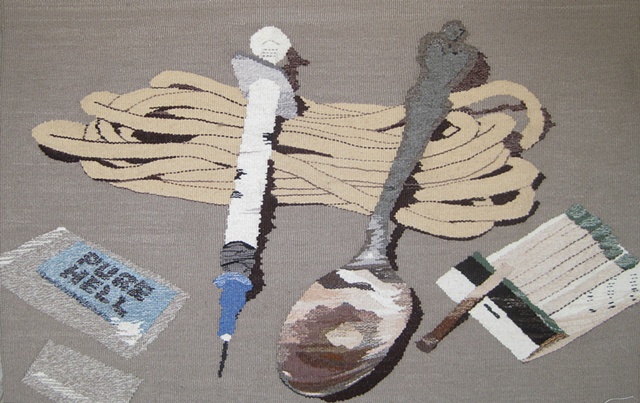 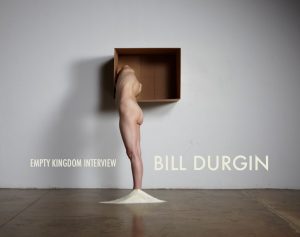 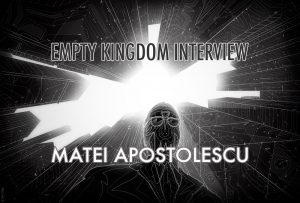