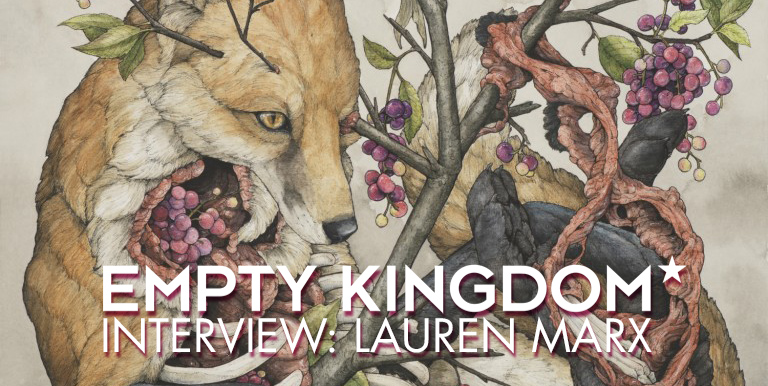 My oh my do I love the work of Lauren Marx. Violent, brutal, unrestrained, her art makes me feel primal and stirs something ancient and normally restrained within me. Colorful, beautiful, and elegant, her content is a contradiction, carnal yet refined. And as a person she is deep, insightful, and honest. Her interview is touching and a damn good read:

In your About section, you said you’ve been interested in animals a long time, do you have a favorite animal?
Yes! My favorite animal is a sheep. They are so fluffy and dumb. 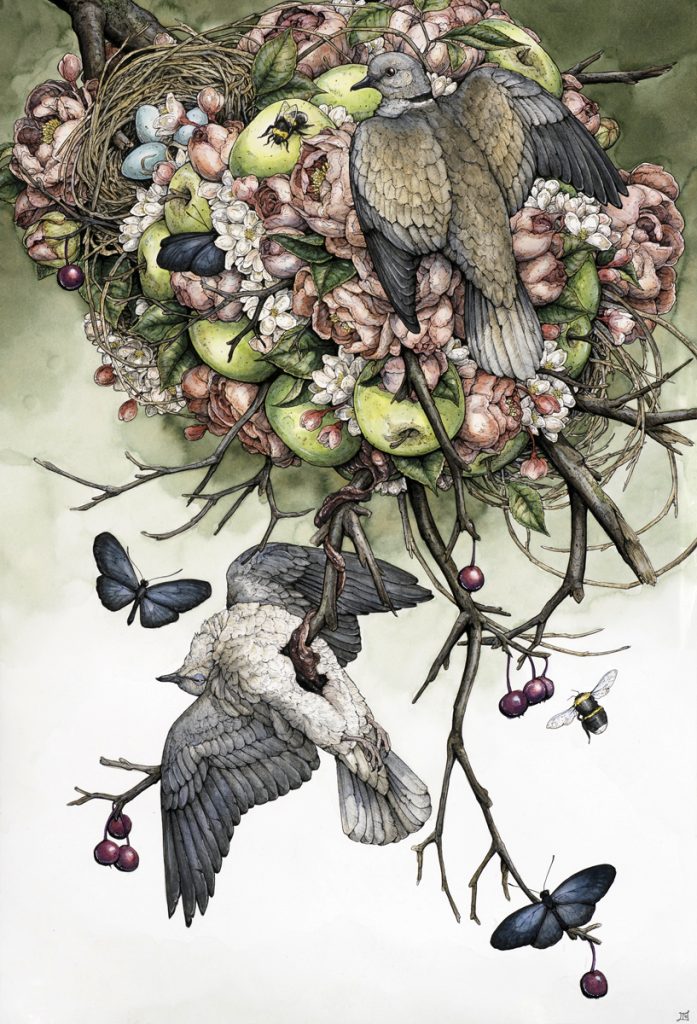 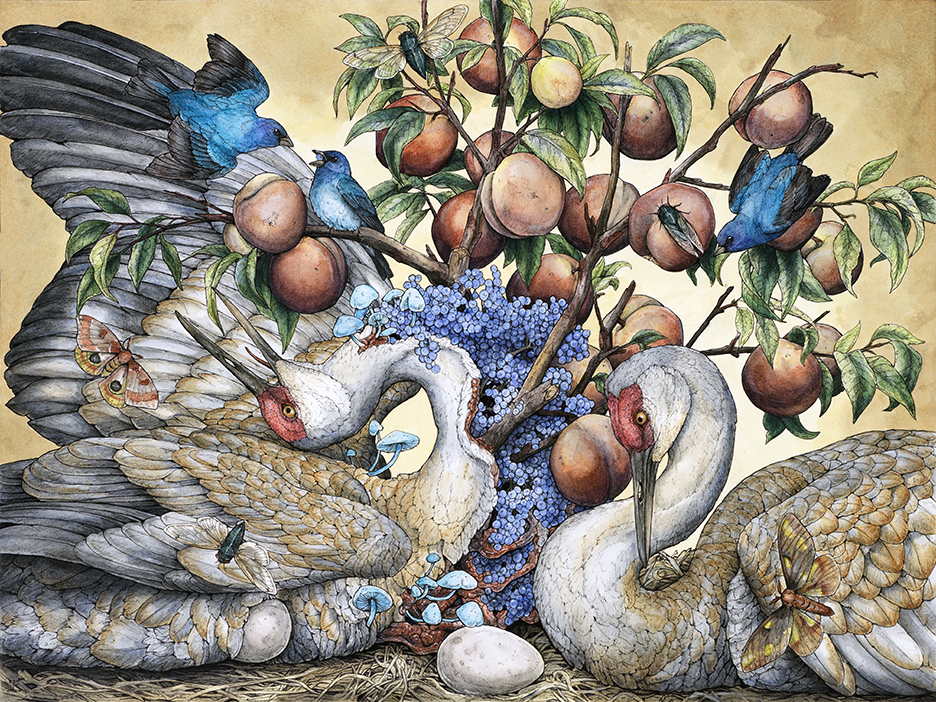 How does your work reflect, play with, or exhibit influence from societal perception of nature?
I do not think about societal perceptions of nature a whole lot, but my work definitely plays upon the newly romanticized view of nature as this pure, beautiful, and distant world. Nature in art has steadily increased since the acceptance of global warming, deforestation, and the greater understanding of the human influences on delicate ecosystems. Nature has become the number one concern in several parts of the world and to me personally. I feel that this is one of the reasons humans do not, nor will ever, appear in my work. 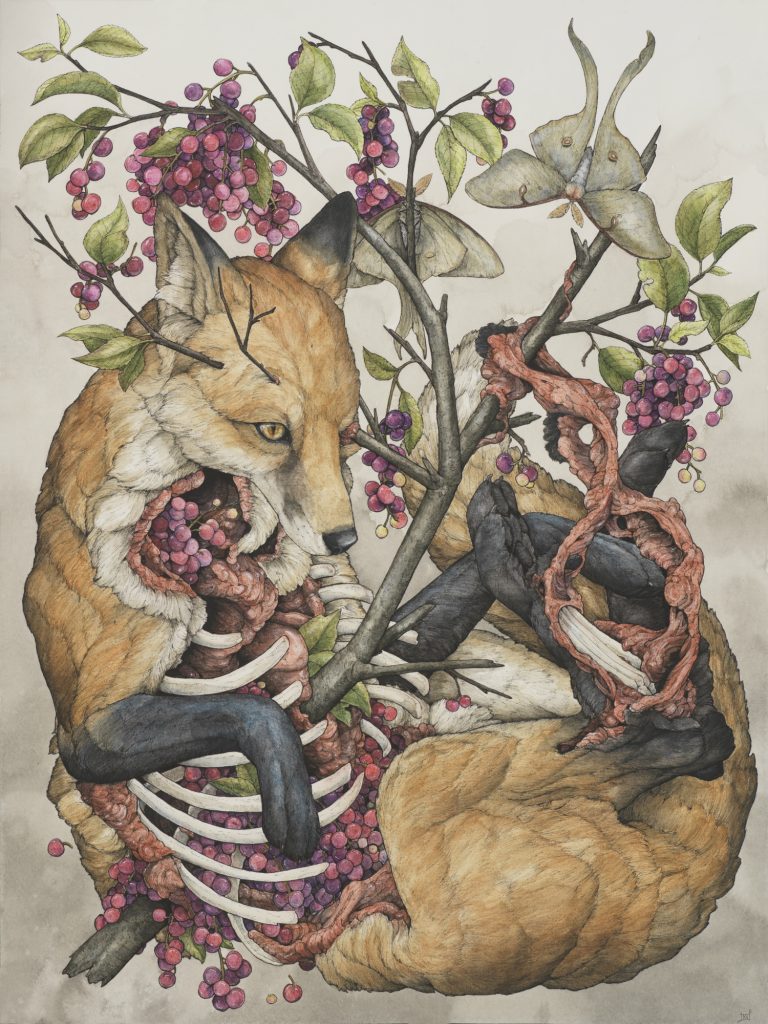 We imbue nature with all kinds of different emotions and associate animals with many different meanings, why do you think this is? 5.)What is it about the human condition that we seek to humanize other creatures?  To impress upon them the traits that we see in ourselves and each other?
Human culture has always focused on a symbolic side of nature and animals because, in my opinion, we long for a deeper connection to the natural world. We also applied these symbologies to learn, to create stories and religions, and to try to explain our place in the world. Humanity has always longed for a meaningful and personal connection to nature. 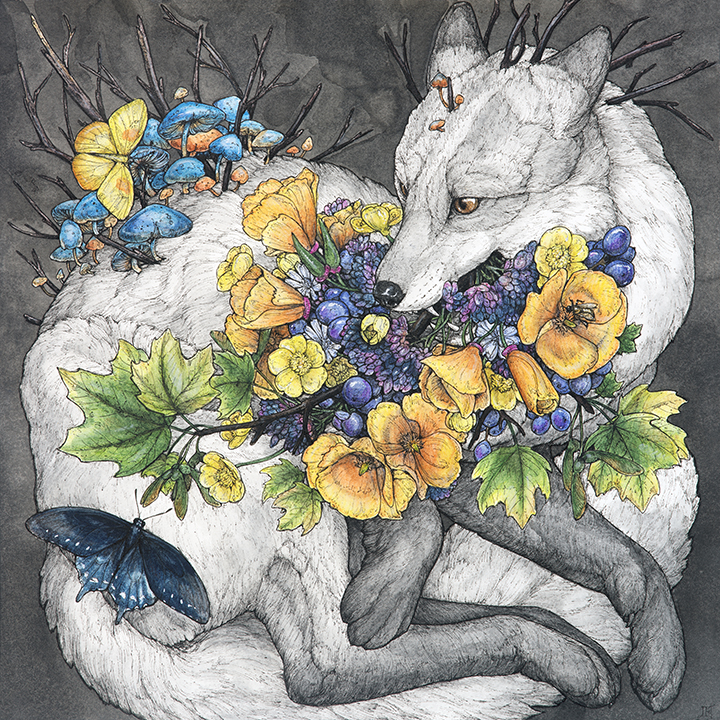 There’s a degree of violence to your work, where does this come from?
Oh man, that is a deep question for me. It comes from a couple places. I have a strong fear of death and the violence of death. I am afraid of dying or the people I love dying, but I am very aware that one day I will die. At the same time, I had a very hard time growing up being emotionally and physically abused by several close family members. The anger stuck with me and I use the “violence” of my art as an outlet for those emotions. I try my best to surround the violence with beauty to remember that not everything is so dark. 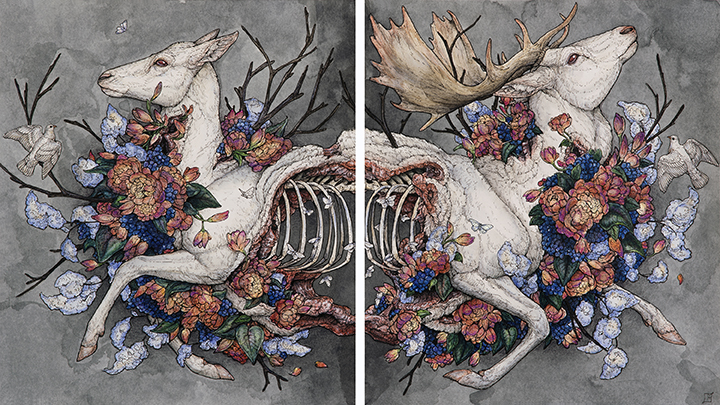 Would you call actions taken by animals in their fight to survive violent?  Or something else?
I would definitely consider actions taken by animals in order to survive to be violent. Nature is incredibly violent and all flora and fauna must fight to survive, and all living creatures must consume other living things, or risk being consumed themselves. It is a beautiful and powerful violence that I am excited to be a part of. 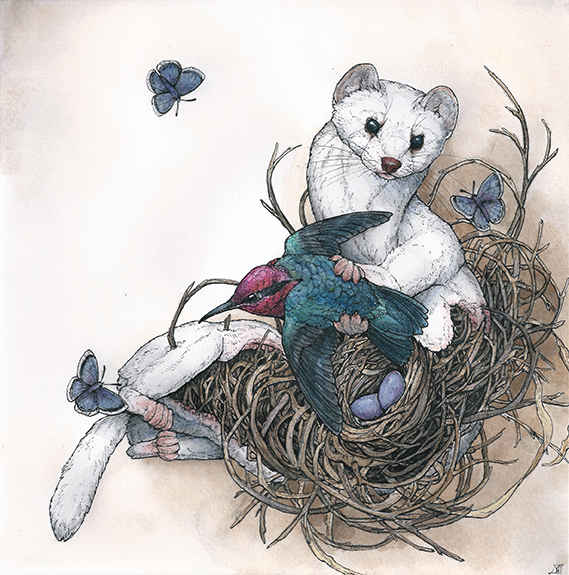 Phalacrocorax auritis shows a bird disemboweling a fish, while being split apart itself.  How would you describe the emotion of such a visceral piece of art?  What do you think your viewers would see?
That’s an interesting question. To me personally, my pieces feel very static and devoid of emotion since I see them more as scientific illustrations, yet this piece is very violent and I would say my pieces are very sad or angry in nature. I could see the viewer getting a very negative emotion from this piece, but that would depend on who they are rooting for, the cormorant or the fish. 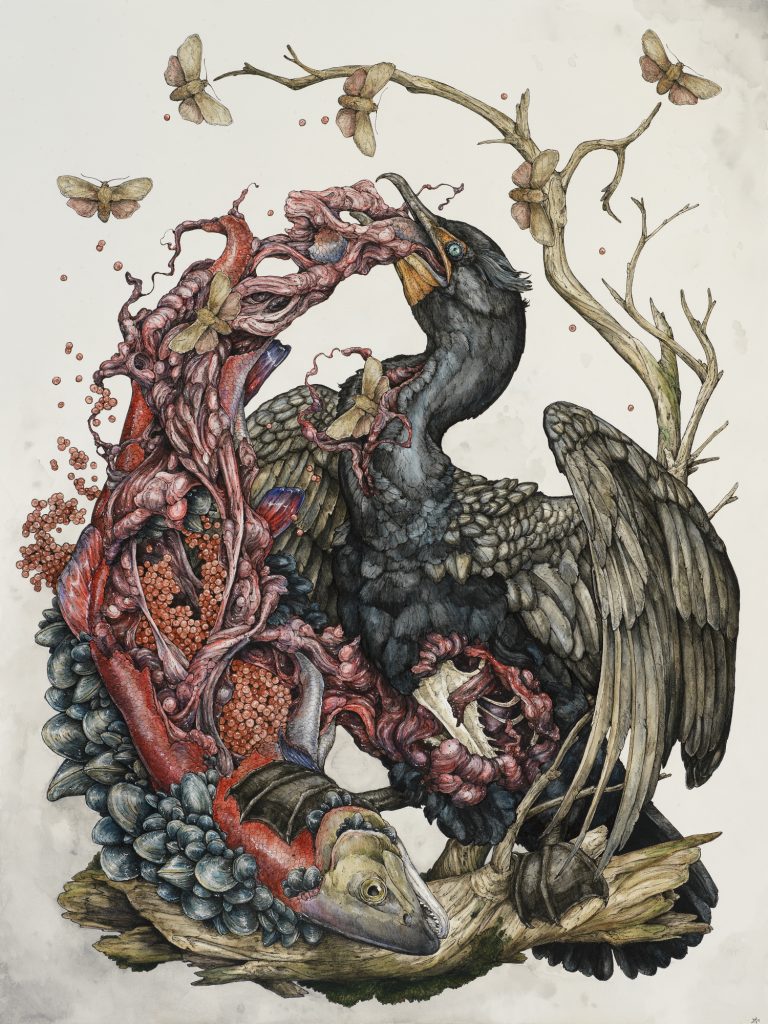 Describe the meaning, symbology, and ideology behind Red Fox and Indigo Bunting.  How would that explanation change if I asked you to explain the piece to a 7 year old?
The “Red Fox and Indigo Bunting” is a very different piece in that it was created while I was still in my second year of undergraduate school. Honestly, I was not thinking at all of symbology, or meaning, nor anything of that sort. I was merely practicing composition and style. It was one of my first pieces that I had created in the style I would grow to focus on. A year or so later, I actually began taking on the challenge of creating works around a concept. 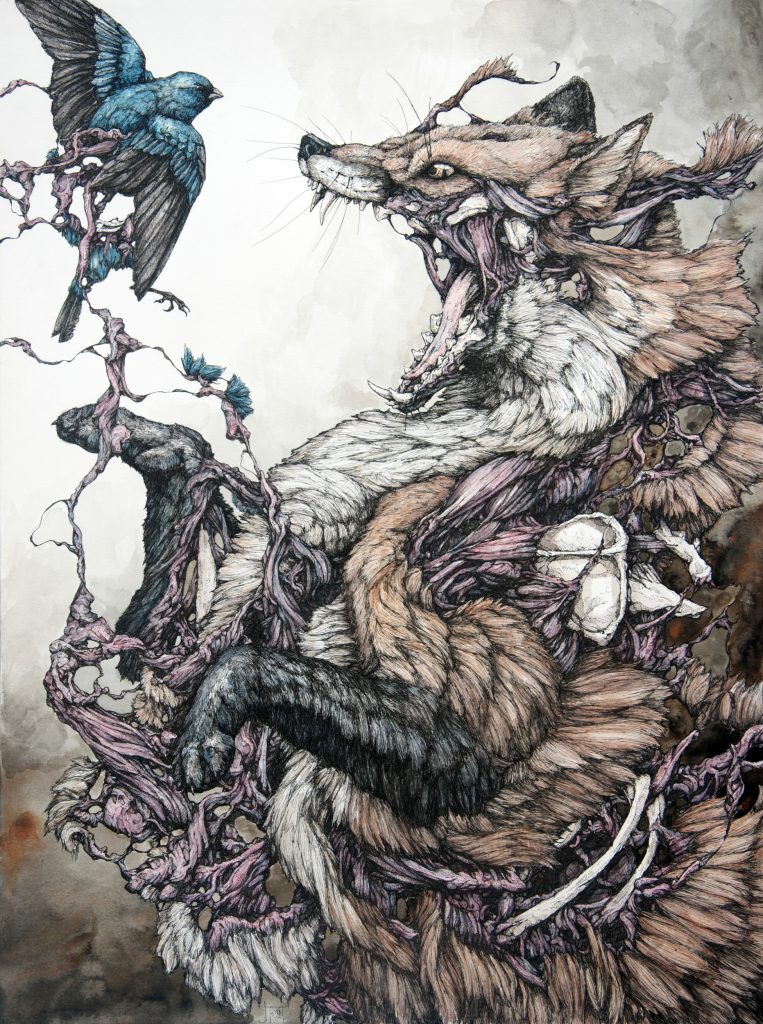 As children we have illusions about nature, we marvel at it and are overwhelmed by it’s grace, majesty, and scale, and it is fearsome.  As we grow older many of us lose this capacity to wonder, it is replaced by an understanding from a more realistic perspective of the workings of nature.  How do you think the perception of you work changes as your audience grows older? Why do we lose our ability to marvel at the world?
Since I have only been creating my current works for a little over three years, and because I am in my early twenties, and have an audience ranging from anywhere between 18-60 years of age; I feel that the perception will not change much at all as my audience grows older. I am excited to see what the perception of my work ten years down the line will be. I feel that perception will change more as my concepts change versus time. I think we lose our ability to marvel at the world because of how stressful adulthood is now-a-days. It’s hard to enjoy the scenery around you when you are worried about paying bills, finding a job, completing school, paying taxes, or any of the other societal pressures that we have to deal with. Basically, stress would be my best guess. 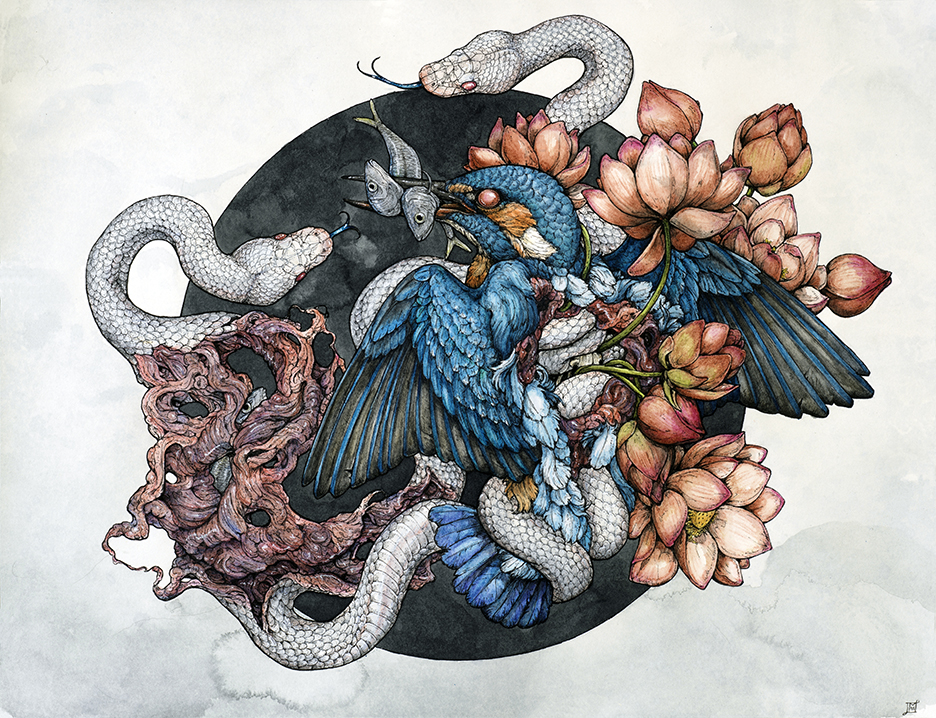 In almost all of your pieces, something is dying, or tearing apart, while something else is living, often fed by the death of the other animal.  What does this mean to you?
This question relates a lot to my answer given in a previous question. My obsession with life and death has a lot to do with my obsession, and attempted acceptance, of the violence of nature and of my life. Death is the most powerful force in nature, but death is also terrifying and grotesque. The emphasis on animals consuming other animals in my work is my illustration of the delicate balance of life and death and the circle of life that is necessary for aspects of life. 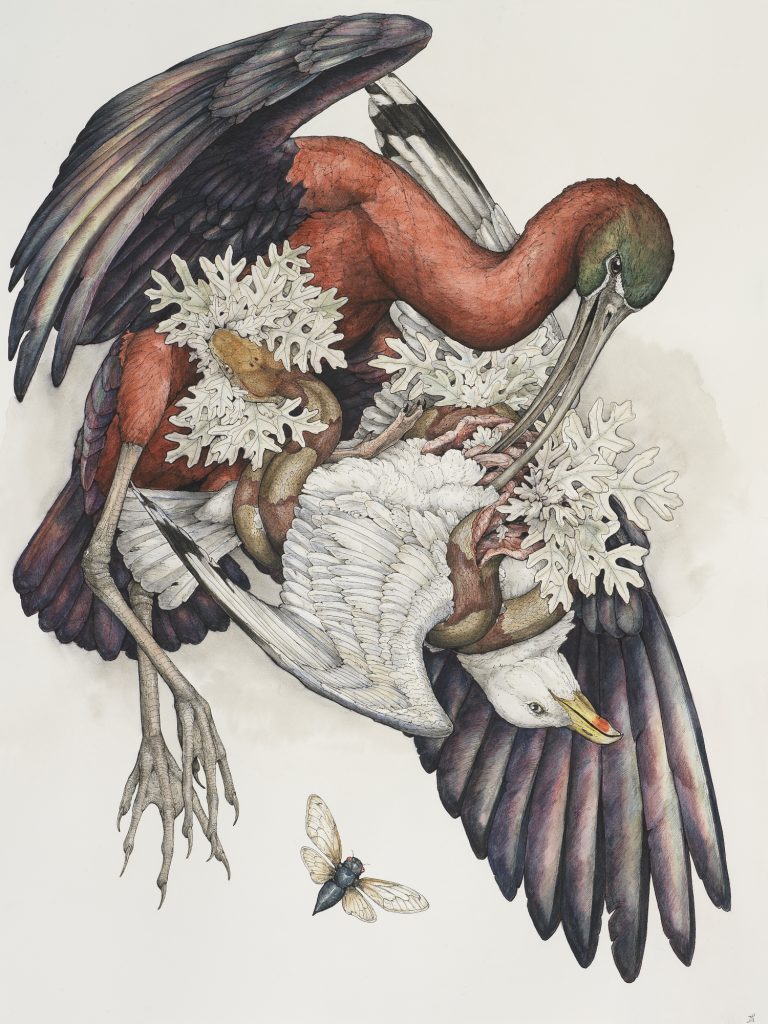 Do you feel the need to depict both sides of the food chain when you work?
Not necessarily. I really don’t think about it while I am working, but it could be something I move more toward showing in the future. It tends to sometimes come out in my work, but I would say it is more common that I create a section of an environment in my work with an interaction of that environment’s creatures. 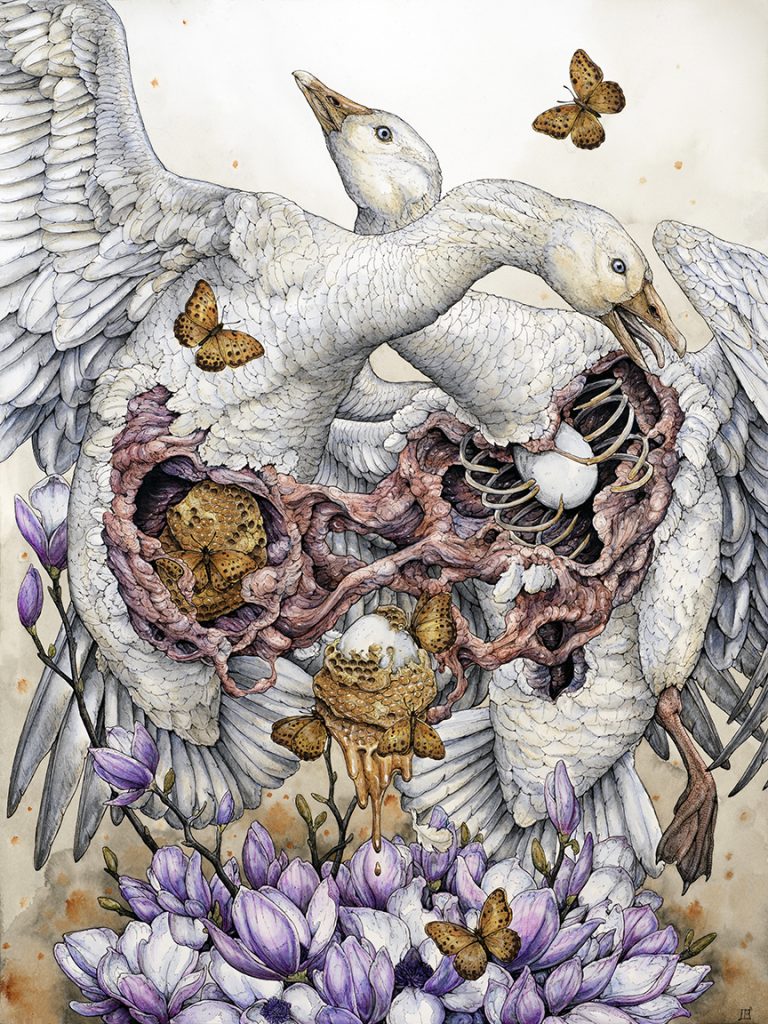 High animals, chimps, elephants, dolphins, are known to mourn the loss of family members.  Do you think the idea of ‘death’ is a human concept?
Absolutely not, but I do believe humans tend to obsess more over the concept.

What do you believe waits on the other side?
A large flock of cuddly sheep that smell like candy.

In your About section, you mention that your passion has spread to cosmology, and mythology, in addition to zoology.  How do these influences build on one another?  Do they contradict?
These influences build on one another usually in the form of cosmology leading to mythology such as constellations influencing, or being influenced by the zodiac. Zoology is more loosely related in that mythology influenced science recently in human history. This is a bit vague, but this has been a concept that I have been moving away from since graduating from undergrad a little over a year ago. It was mainly part of my undergraduate thesis so it has been a while since I have thought about it, honestly. 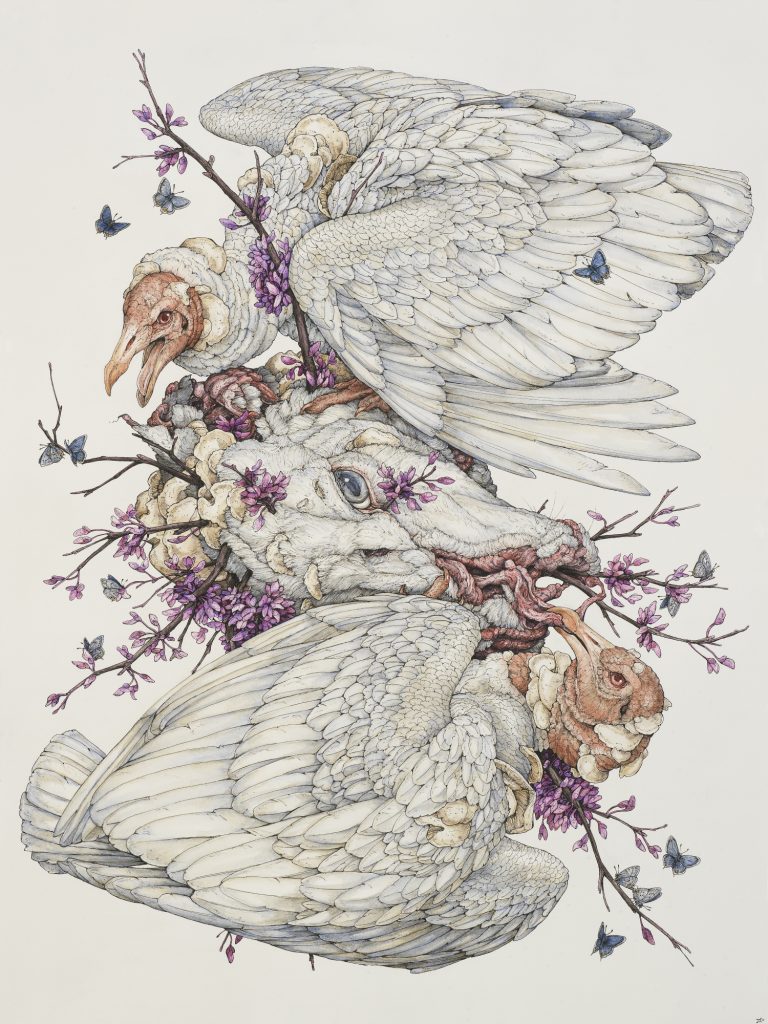 Do you believe the mythologies or are they just a heuristic for your continued growth as an artist and person?
They are generally heuristics in the growth of my artwork and I enjoy them as a possible exploration for some pieces. I do humanize my animals and see them as characters, so in that sense I do believe in mythical beings. I do not believe in specific mythologies, however.

What does 2016 hold for you?
Hopefully lots of exciting things! I do have a solo show planned at Corey Helford Gallery this November, and a couple small shows located on the West Coast and Tasmania, but things can be rather spontaneous.

What series are you working on?
Right now I am creating a large body of work for my solo show at Corey Helford that will be about the abusive relationship between my sister and me. I have already begun working on the show and it has been very therapeutic so far. 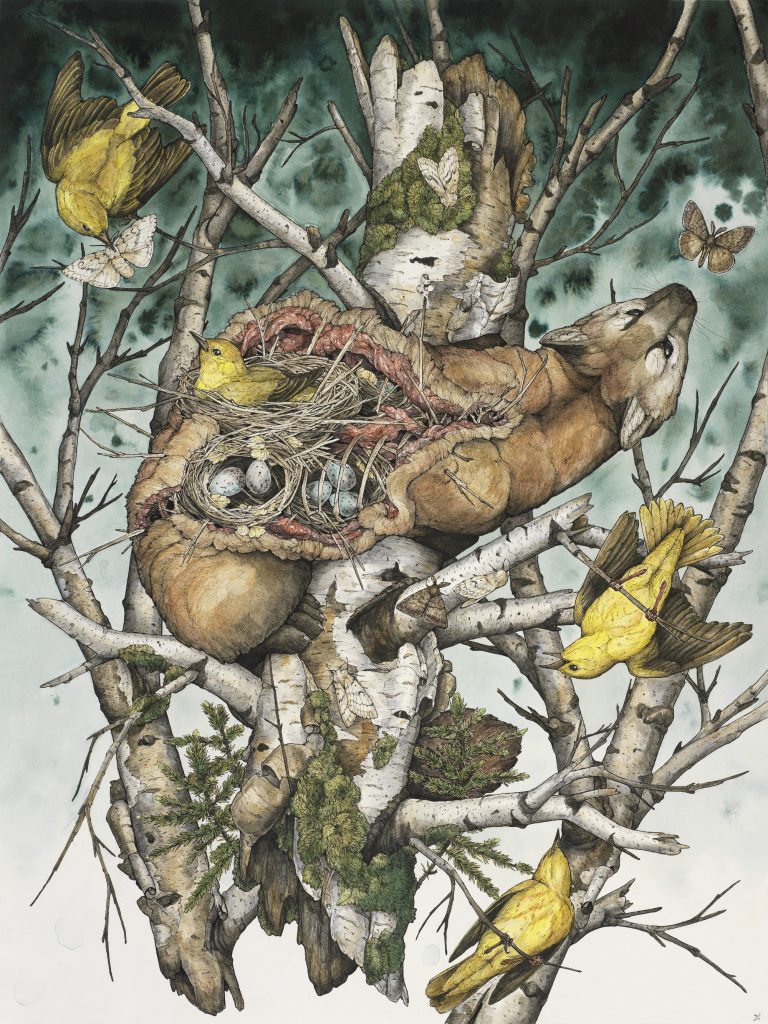 What themes are you working with and why?
My past themes have been about mythology, but my new themes are more focused on the personal fractured relationships between certain family members and myself. I figured it would be good for me to explore personal narratives, which is something I have actively avoided until now. Time to get over that fear.

Do you have a favorite myth?
I do not. I love all sorts of mythologies and folktales. 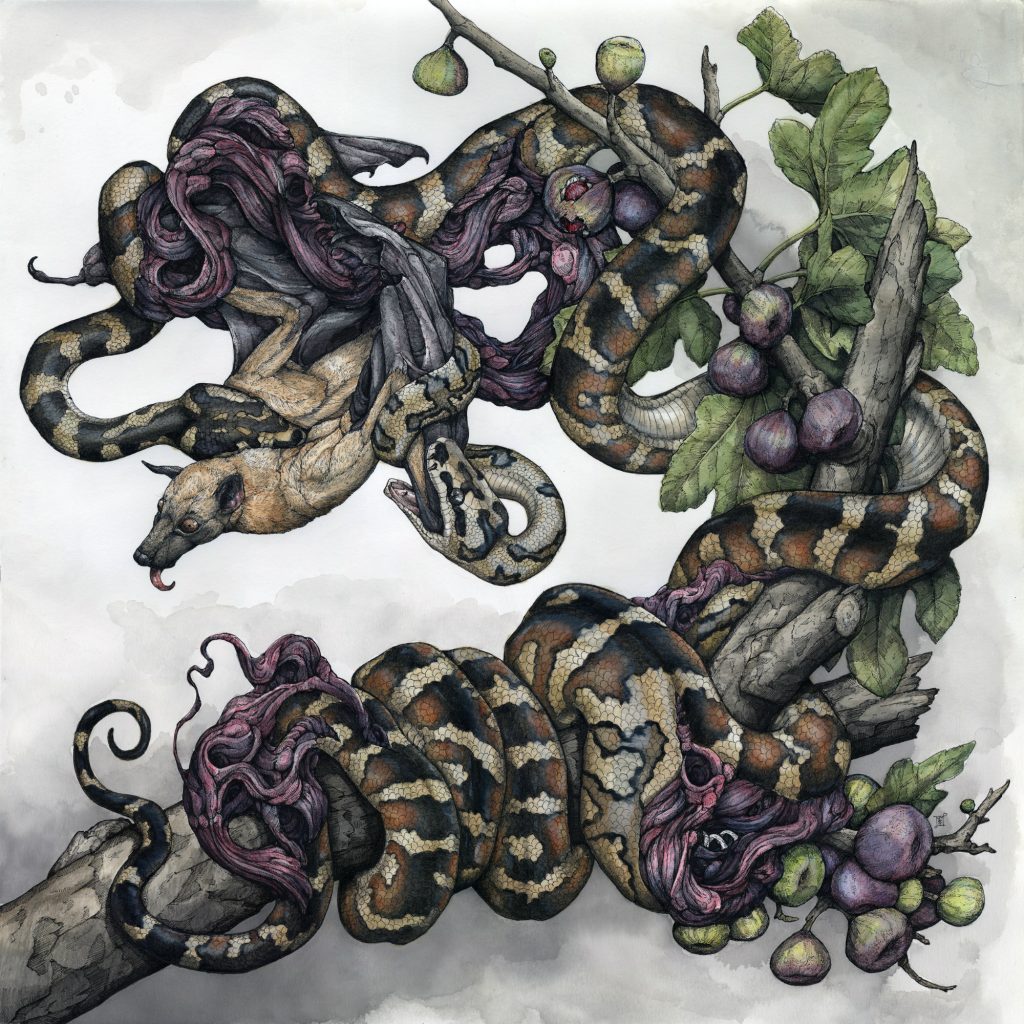 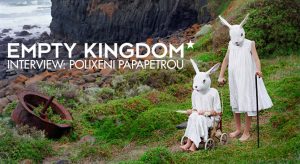 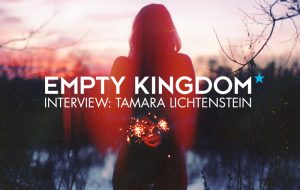 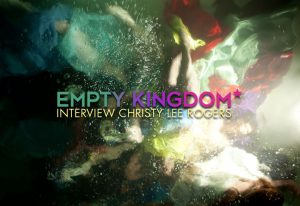 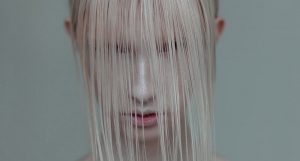 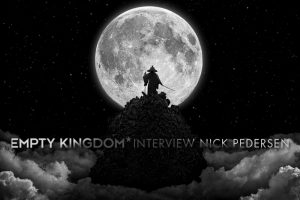