Tom Gallant is well versed in pushing the limit. His previous discussions of sexuality and human form are deep, meaningful, and challenging. His newest series is no exception, addressing cultural mores and how they are passed down through time. Check out his thoughts:

Where did the name ‘a tree is best measured when it is down’ come from? How do you think it speaks to, or represents this new body of work?

To me the title references man’s greatest inhumanity, that of believing himself to be better than nature and animals and the destruction of the environment to feed his progress.

The origin of title actually comes from an operas created by Robert Wilson to music by Philip Glass, David Byrne and others, inspired by the American Civil War. I came across it during my BA and revisited it whilst researching songs and music relating to the Black Holocaust. It felt appropriate on many levels for this project. Obviously in reference to the Sylvanian landscape that was generated through myth and propaganda but also in relation to Tyr, the rune that symbolises tree and the Battle, kampf. The tree has been central to pagan symbolism and is frequently anthropomorphised throughout legends and culture. It struck me as a wide reaching motif from which to base the start of this wider series of work. The other title for this series is A Wreck of Hope, from Caspar David Friedrich’s painting Das Eismeer. 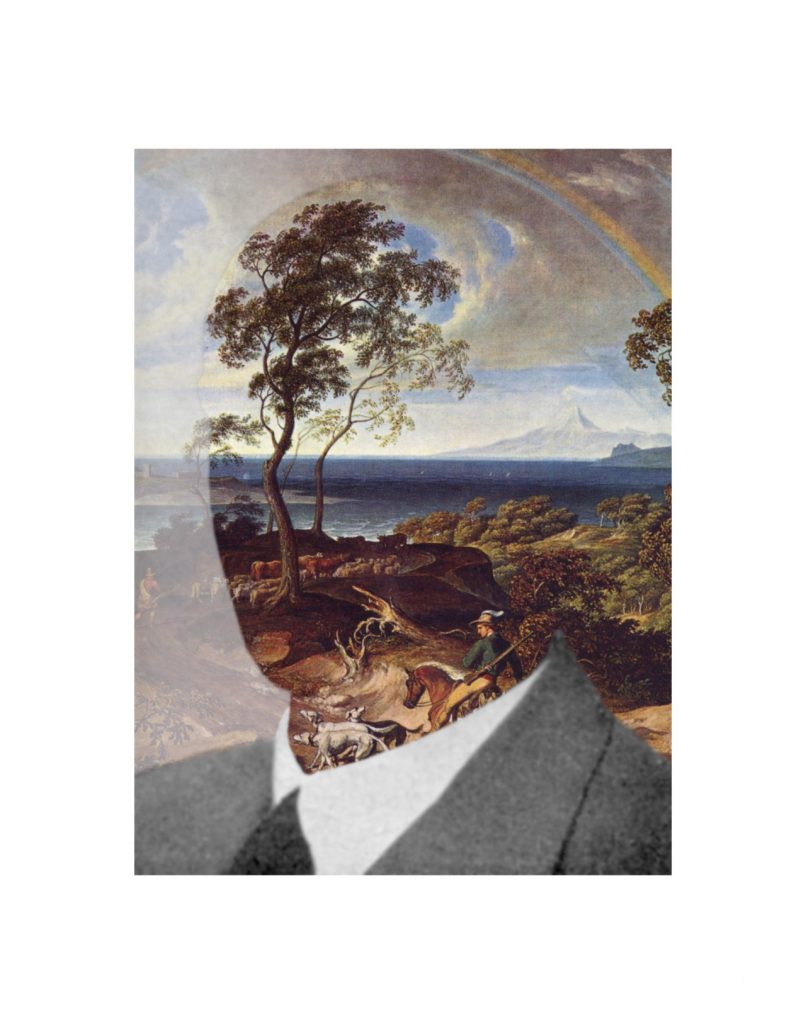 What was the seed for your interest in the subject matter of this series? The Black Holocaust and the Transatlantic Slave trade are both very dark subjects, what about them intrigued you? While those events set you down this path, one could argue they aren’t visually represented in your work. What would you say to this? How do you think the final message or meditation of your series comes across to the viewer?

I was invited to make a proposal for a project in Manchester and began research into the Suffragette movement followed by the industrial revolution. I was quickly overcome by the direct effect of the textile industry on slavery and its links throughout the city and country. The treatment of slaves and indigenous tribes encountered throughout the history of the Transatlantic Slave Trade fascinated me in its horror and banality. Nonetheless, it was the complicit nature of the general public who were witness to this barbarity that struck me as being the key to the relationship with the building of empires and the holocausts. 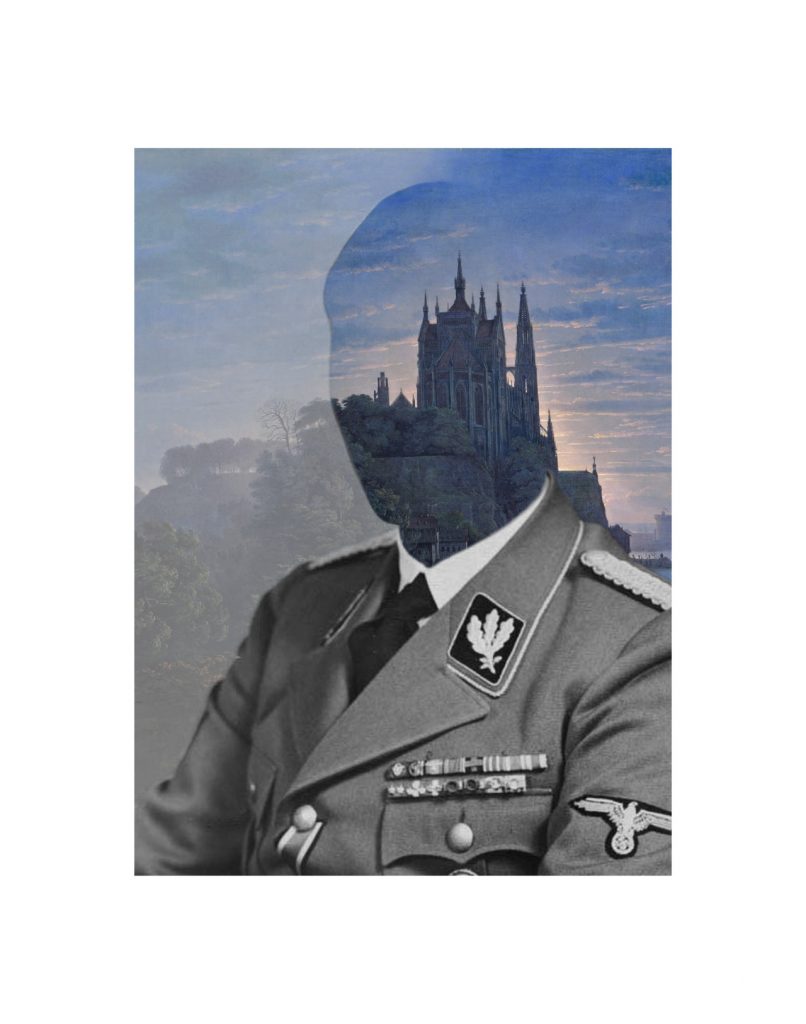 The project in Manchester has been delayed due to funding and last year after constantly working on the research for the applications I began a series in the studio in order to return to making. However, the latest development aims to bring these elements of research, the slave trade, to the fore and Manchester will happen in spring 2017. I would argue that metaphorically the rise of a country through its portrayal of national identity as being superior and justification for dehumanising the ‘other’ is very apparent and references the rise of Britain as much as Germany. 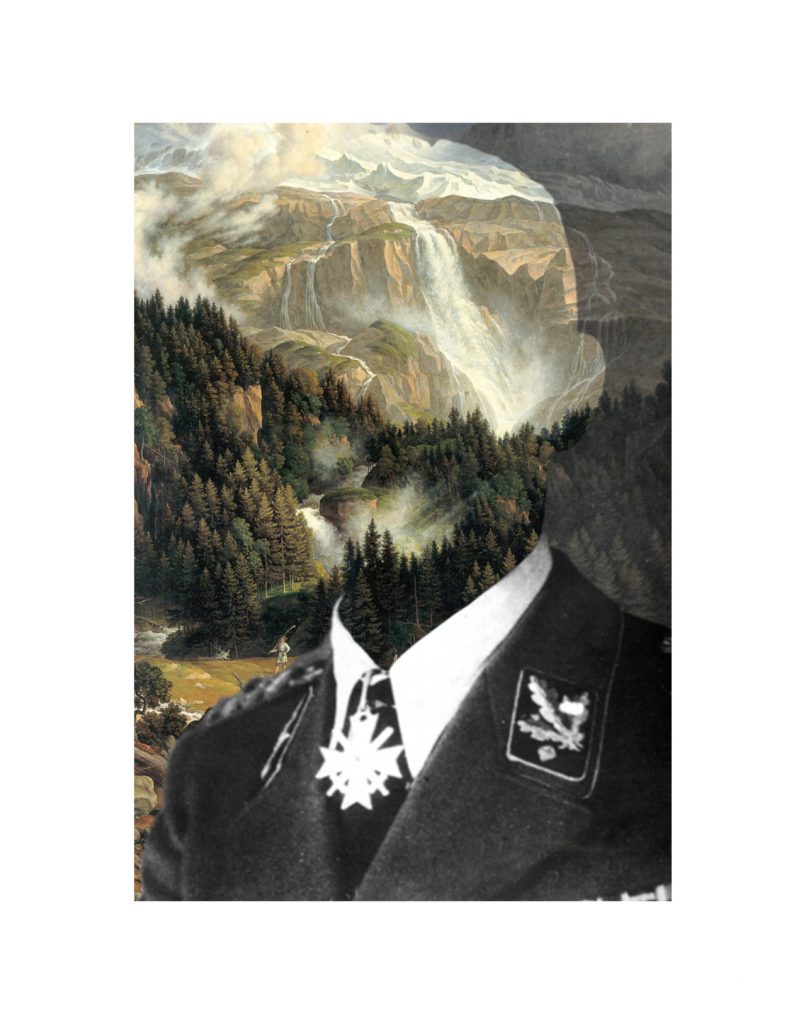 Your subject matter is conflicting and complimentary, Sylvan and Teutonic landscapes, and portraits. Why these two? What does the scale of each mean to you? Why have you chosen to make the characters faceless? How does the meaning and ideology of Romanticism play with the identity of these men, who were responsible for the rise of the Third Reich?

I wanted to deal with the landscape as a symbol or portrait of national identity and the relationship between the shared histories and motifs of the construction of empire in Britain and Germany. The technique and imagery creates distance and attraction through the placement of key focal points and the treatment of both textile and nature with equal detail and obsession. I hope that this renders the two subjects as banal and horrific in equal measures whilst beautiful in detail and presentation; a conflict that has always been present in my work. It is a well worn mode of expression and there has always been a role for the expected as well as unexpected in my work. 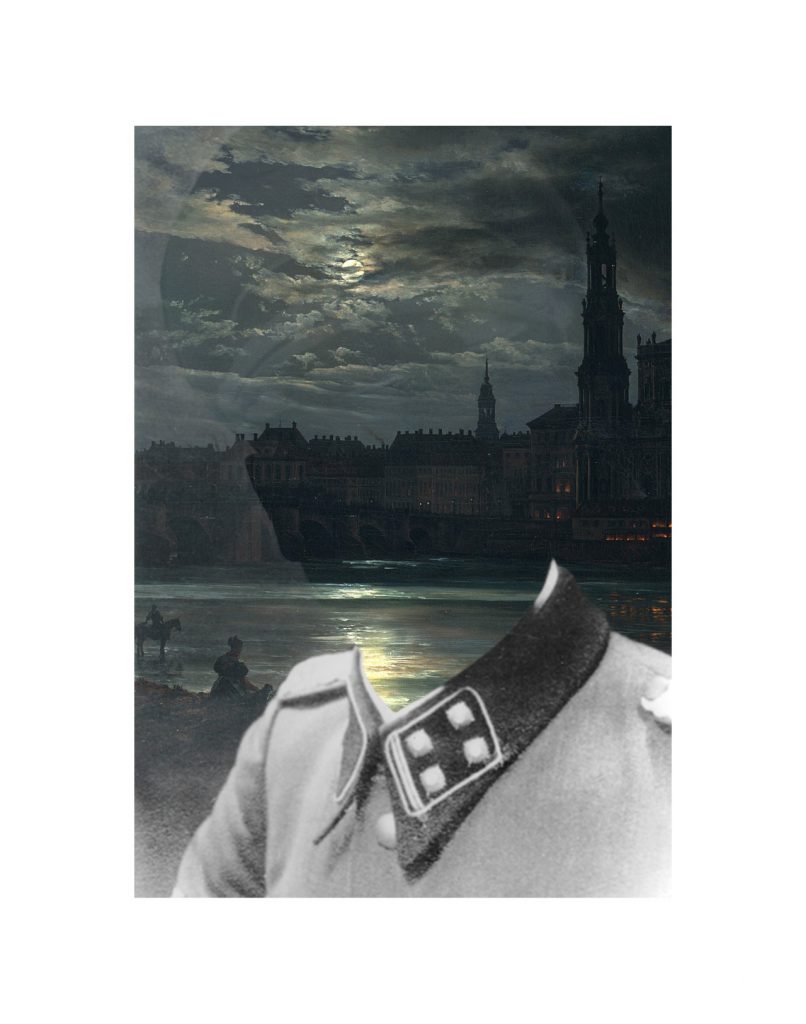 In many ways the characters are not faceless but their faces are meaningless. What is central to the work is how the construction of the national identity removed the identities of the individuals and led to the dehumanising of both the oppressed and oppressor. The second world war and genocide has sadly become an easy monster to place on top of the hall of fame of man’s inhumanity. As a result Germany’s past is viewed as a singular path that built the platform on top of which Hitler led the country into destruction. However, Hitler picked what he felt the country, destroyed by the previous war, wanted to hear and needed to see in order to follow his team’s ideology. There are few developed nations that don’t have a heart of darkness nor people that haven’t followed tyrants. What I have taken from Romanticism is the danger inherent in the creation and worship of utopias both past and in the future. Where we need to be is here and now and present in our lives and relationships and communities. 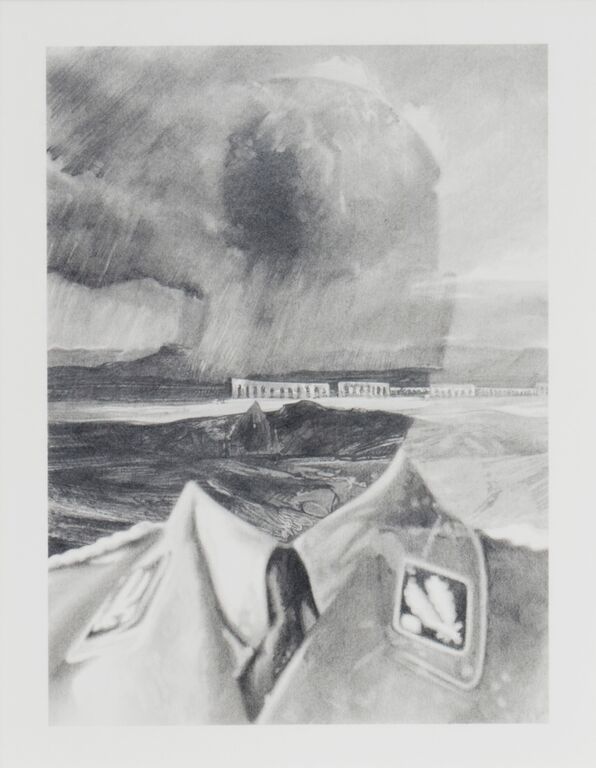 The content and method in this series is quite a departure from your Collector series. Were you excited to try something new? Apprehensive? Your Collector series was a powerful comment on sex and pornography. In ‘a tree…’ you’ve taken on something much deeper, culturally, nationalism, oppression, violence. What is challenging about it? What does it mean to you personally? Why is this a conversation we should be having?

It was quite a progressive departure, in that it took me a while to remove myself from technique and external demands for repeating myself. I began simply and drew a series of portraits of subjects that arose in my research. Once I had begun I was very excited that years of cutting with a knife had given me a level of control and detail that I never had with drawing before and I couldn’t wait to push the subject matter. As the drawings progressed I became bolder in my adaptations leading directly to the series of landscape portraits. 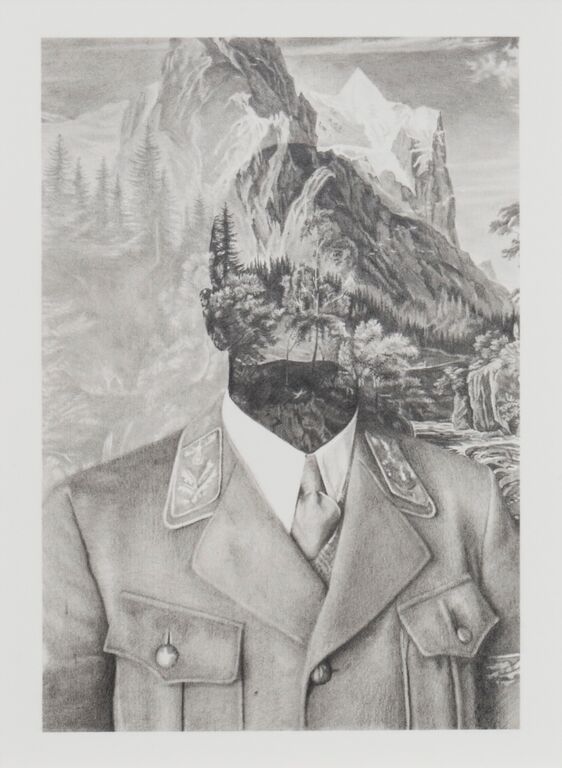 They are collages montaging appropriated images that represent the beautiful contrasted with the horrific. They are obsessively made and presented and in many ways they are exactly the same as the earlier paper cut work. What is challenging is the research and trying to understand the personal and global histories that lead up to repeated nationalism and the oppression of other races across the West. Personally I am fascinated by the lack of freewill in individuals and the manner in which we create gods and monsters. Monsters free ourselves from blame and gods from participation. We need to be more involved in a debate that is open and listens to all sides rather than just polarising incredibly complex arguments on sex, race and religion. 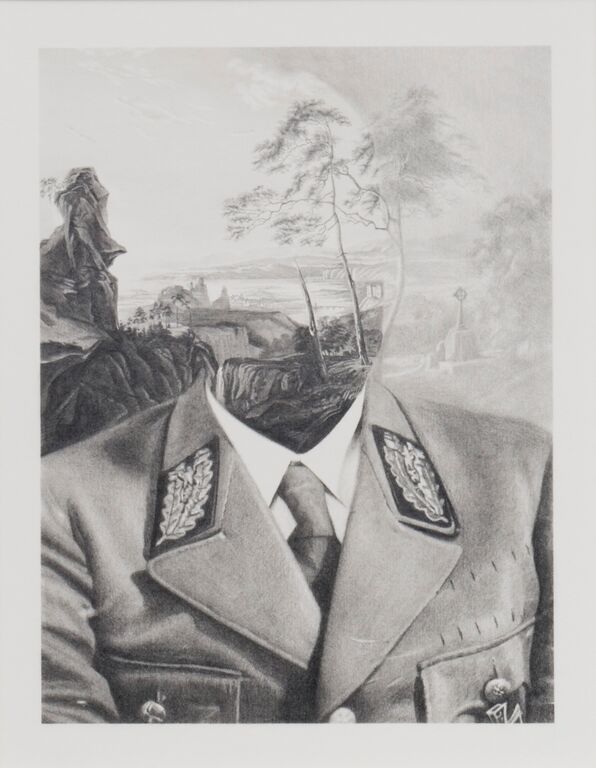 I think that nothing has really changed, we love, stories, legends, myths and art created by the people for the people and there is no difference in Pagan rituals or youtube stars, paintings of forests or instagrams of sunsets. Rich metaphors and profundity have appeared to have been replaced with vacuous gifs and memes but in fact have just created a broader cultural diet for a richer spectrum of viewer and consumer. As a result the mythology and the audiences awareness of its past may get diluted but the information is out there for those willing to search and time and time again there are revivals and a retrospection and the legends return. I think this is evolution not progression. 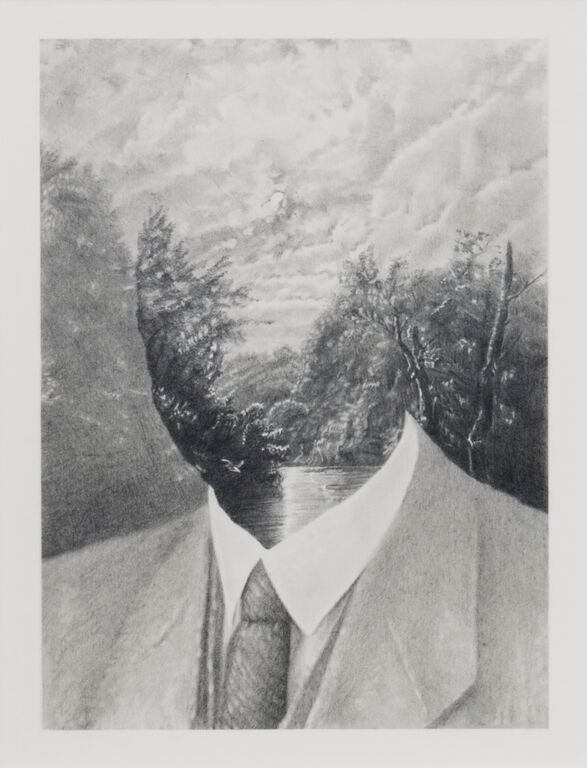 When an artist creates a narrative for their work, and tells people what that narrative is, how do you think that influences their consumption? Would you rather have viewers see the work first, and experience the work on their terms, or hear your inspiration first, and consume the work flavored with your influence?

Most people will know that there will be as much unsaid about the work as said and whatever narrative is revealed one needs to read between the lines. I also think that the narrative is read as a guide and not fact, inspiration rather than a brief for the work. 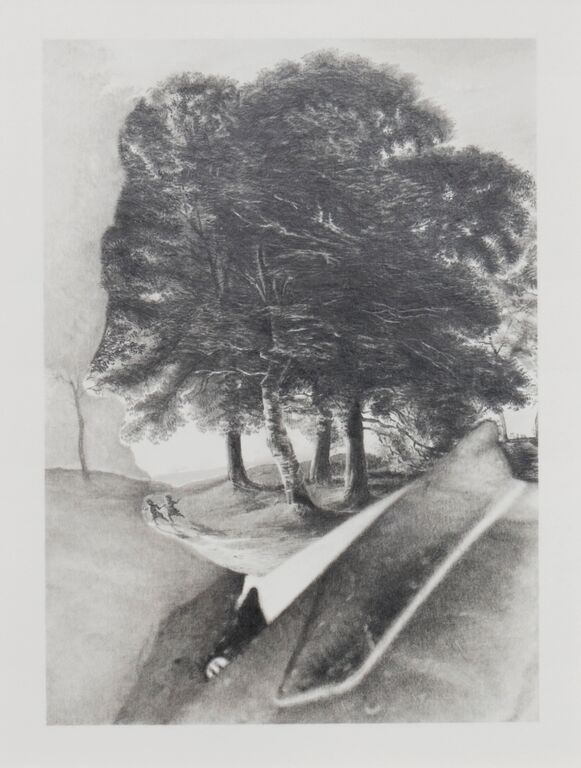 I would rather the viewer questioned the work, regardless of whether that is before or after learning about its inspiration and I don’t have any control over that or desire to control it. I think most people decide on their path and choose to read about the work first or afterwards, the differences will come from how deep they go into the artist’s life and work or the subject matte 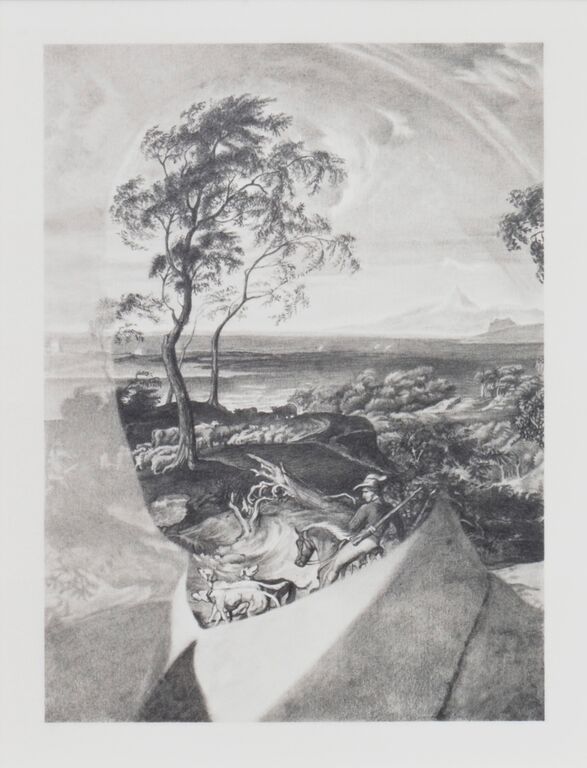 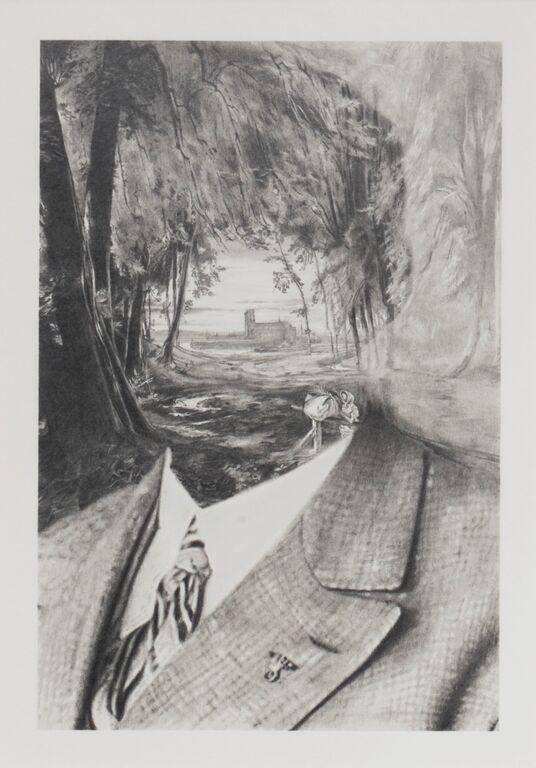 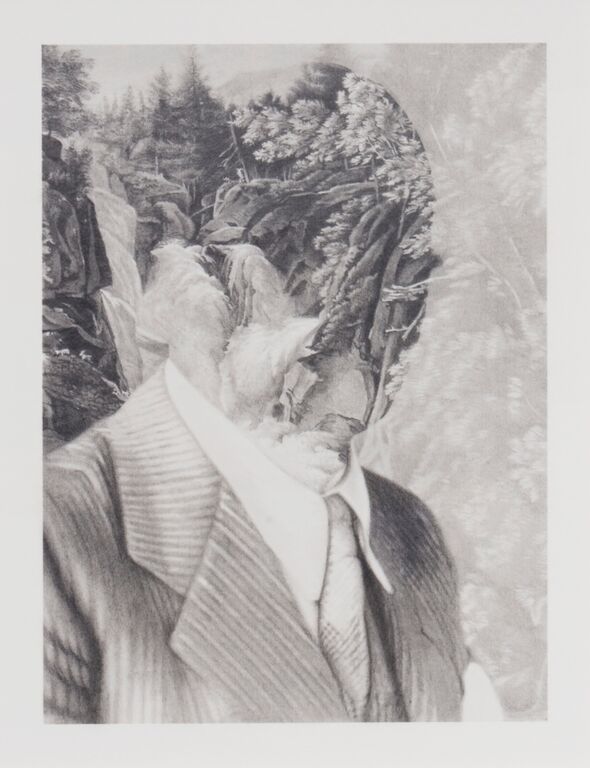 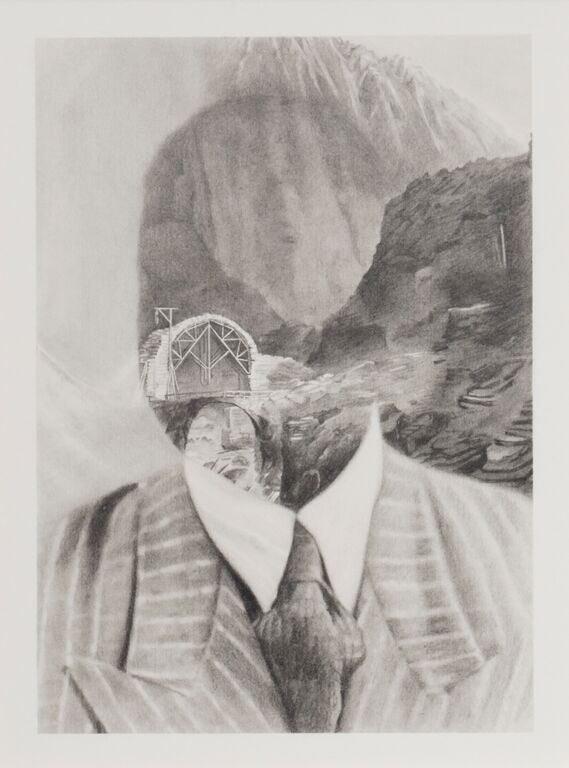 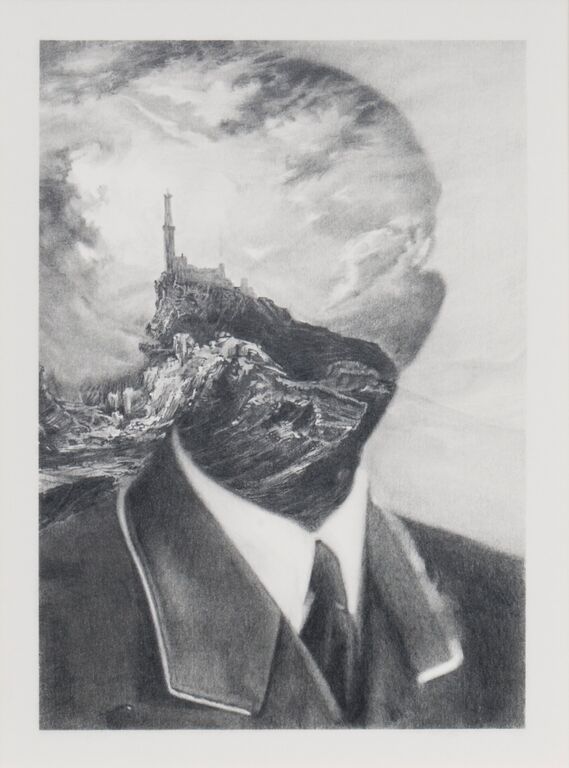 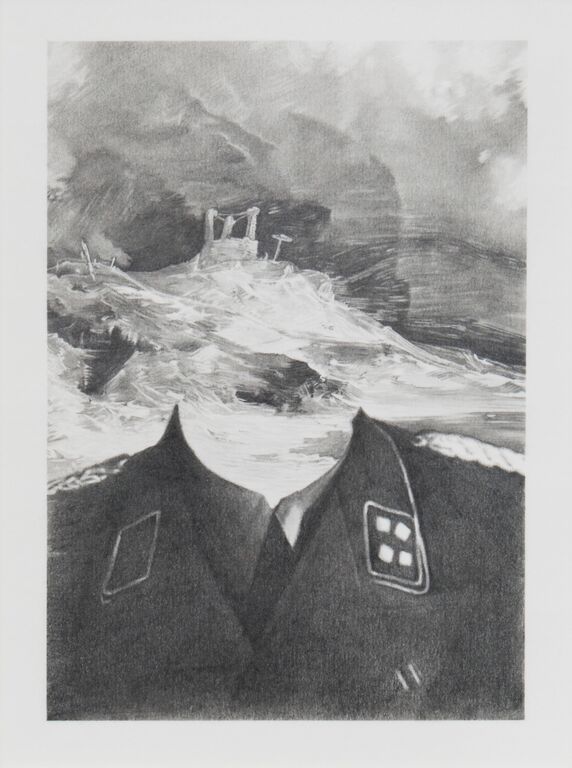 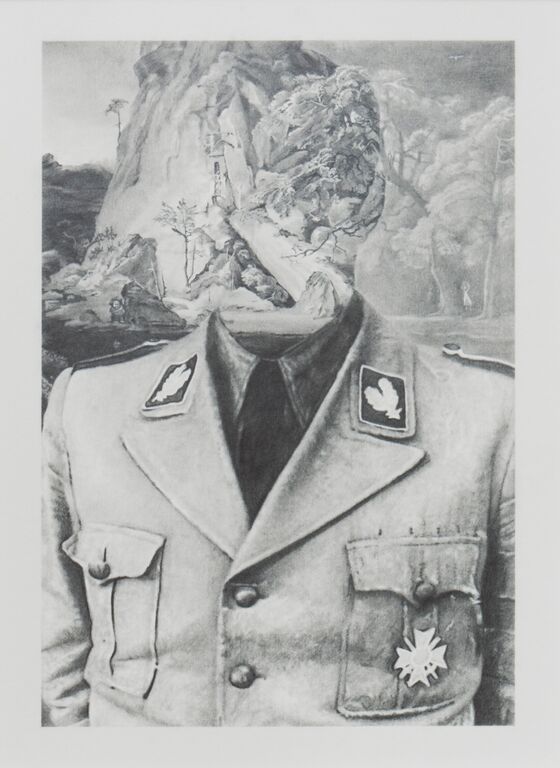 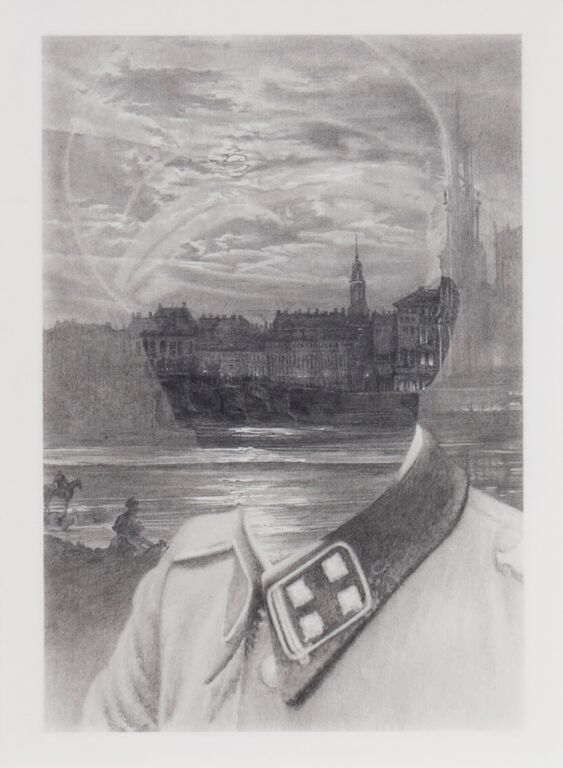 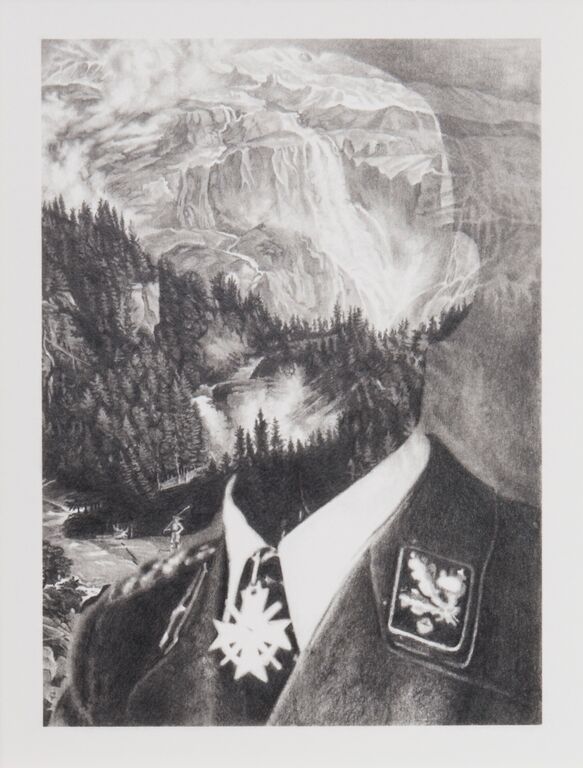 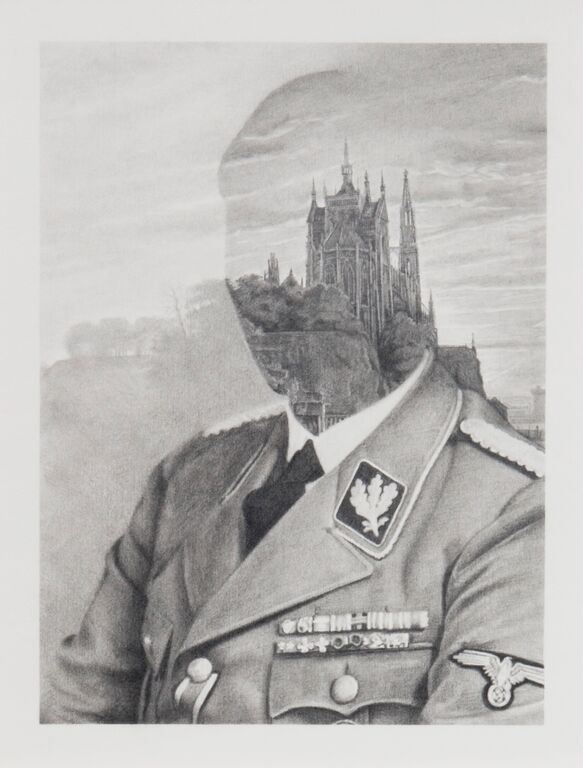 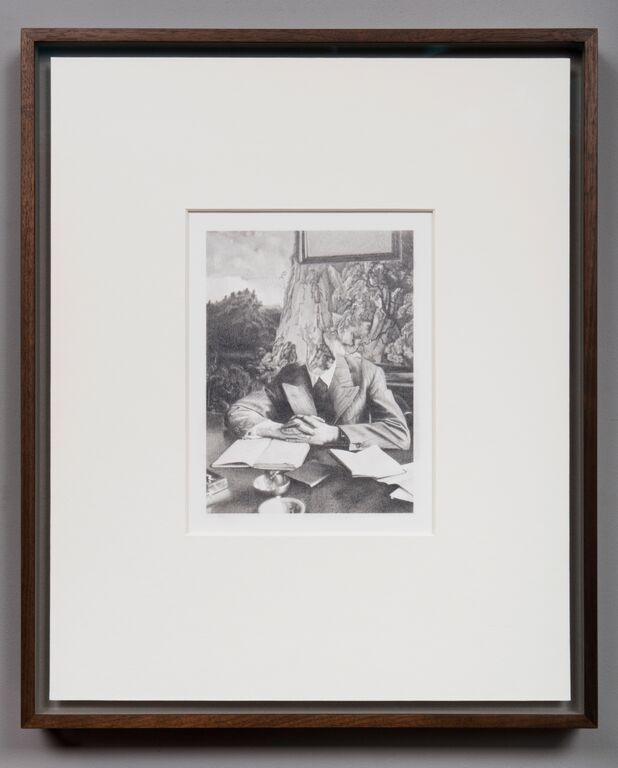 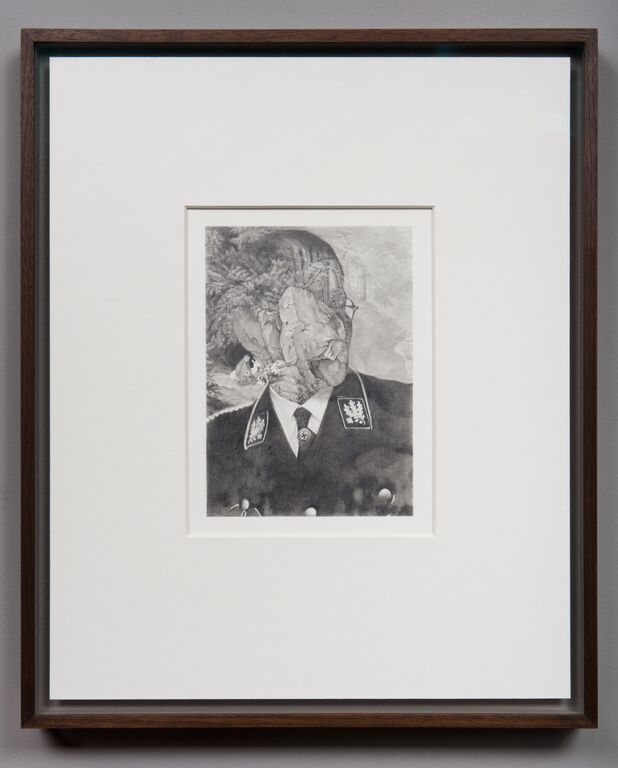 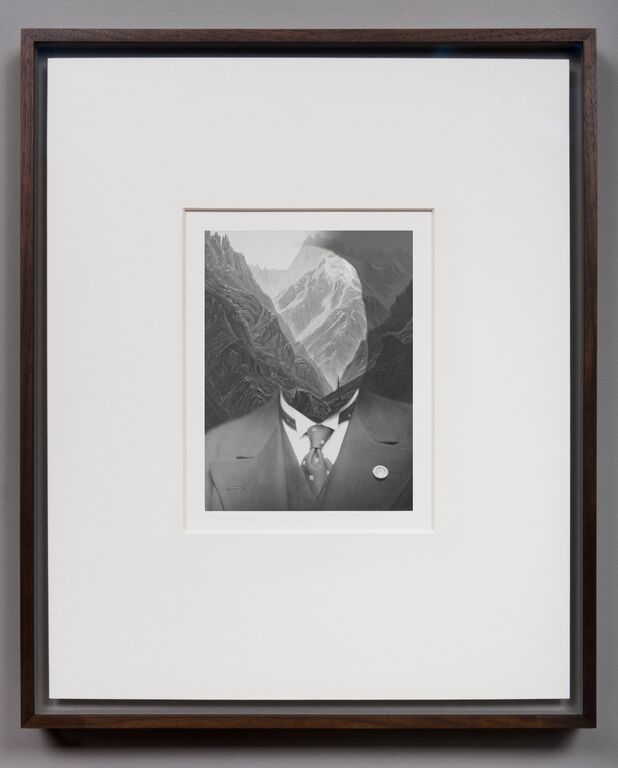 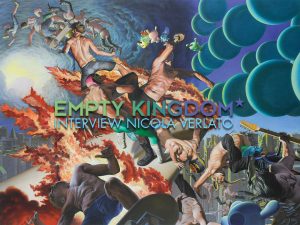 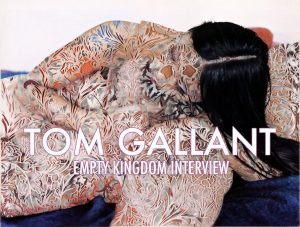 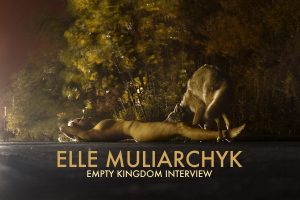 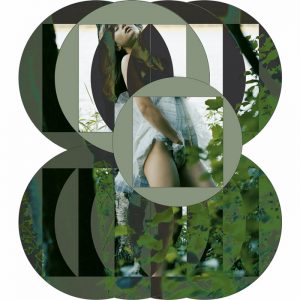 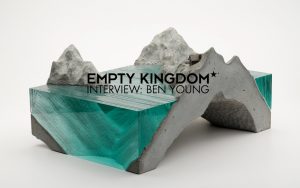 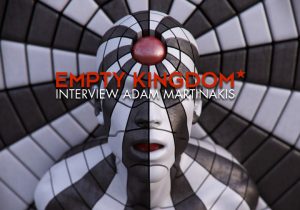