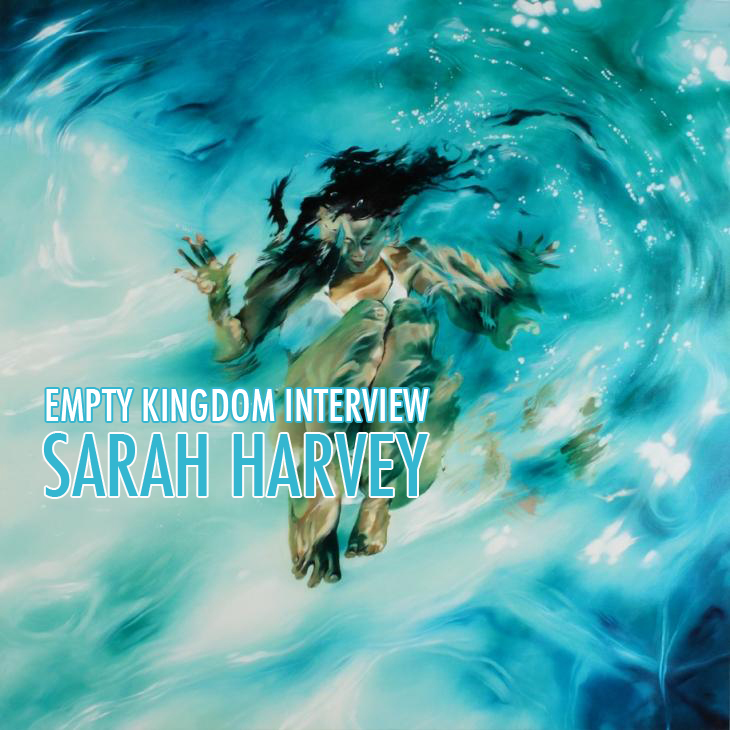 When asked if she would do interview with us, the wonderful Sarah Harvey replied “but of course.” So we made a list of questions, checked it twice, sent it on over, and what we got in return were only some of the most honest answers we’ve ever seen. This girl is thinking outside the box all the time. No wonder she’s so damn talented. Please, read on.

Introduce yourself, Where are you from?
My Name is Sarah Harvey and I live and work in London UK. I have a studio in the East of
London in ‘The Bow Arts Trust’ and I live in a house in the forest to the east of that where I walk
my little black scruffy Schnocker dog (half cocker half Min Schnauzer) called Florence every day.
She has little white feet and looks like she’s just stepped in paint.

What were you like growing up?
I was always a good girl and always wanted to please but at the same time, as a teenager I
never followed the crowd and always did the opposite to what was socially expected. I worried
constantly and still do to this day. I worried about upsetting people, doing the wrong thing,
saying the wrong thing and then I would worry about worrying! When I wasn’t worrying, I was
climbing trees in my grandfathers garden, playing football with the boys, drawing or knockdown
Ginger (Doorbell Ditch) with my best friend who lived down my street.
I had a really happy upbringing though and I think this reflects in my current work.

When did you decide you wanted to be an artist?
I always knew I wanted to paint. I didn’t know the ins and outs of being an artist – I didn’t think
that far ahead at such an early age. All I knew was that I could draw and paint and that was the
direction I followed. I am also a musician, and there was a time that I had to make the difficult
decision between the 2. I play the Saxophone and was in a band but I knew I would have to
choose one if I wanted to be really successful at either. 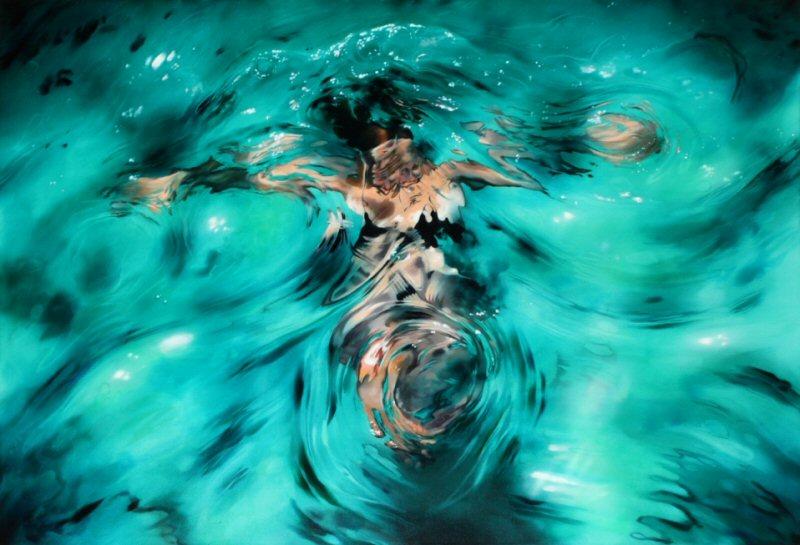 What drew you to painting?
Painting for me was a way of communicating. From the beginning I instinctively knew how to
manoeuvre the paint to do what I wanted it to do. The satisfaction of being totally at ease with
something gave me great comfort. I never found the same comfort in reading and writing so this
was the best way for me to express myself.

Have you experimented with other media?
I love photography, and you rarely see me without a camera in my bag. I am fascinated with
freezing an image. Photography is actually very much relevant to my work anyway as I work
from photos that I have taken and then manipulated on the computer.
I have tried my hand at most things but I know that painting is the perfect medium for me.

Did you go to school to study or are you self-taught?
I did go to school but I taught myself way before this. I enjoyed so much experimenting with
painting and finding out what worked and what didn’t. I started painting with Watercolour which I
loved but after moving to Oils I never looked back. 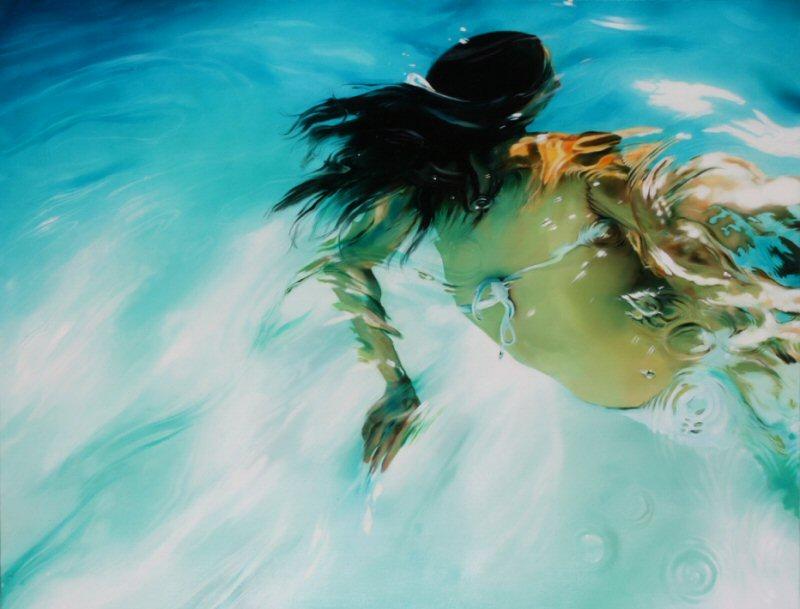 Can you tell us about your process from inspiration, planning, to completion?
There are a number of processes, but it essentially starts with choosing a location, a clear day
when the sun is strong and water that has great clarity and a colour that can accentuate the
bodies contours to give the subject a sense of depth, colour and movement. The photographer
(sometimes myself, sometimes another person) captures this moment through the use of
continuous photography. After scanning through my photographs and selecting the images I
want to work with, I then often manipulate the image on the computer: changing colours, cut and
pasting limbs and combining images until I am totally happy with the final image. My photos
are then sorted into images that show which ideas I decide to work with – whether this be the
vulnerability and sexuality in the girl I am painting, desire, expression, colour or all of these. I
then choose a size canvas dependent on the image and how it would appear, and then I begin my
painting. I rarely make sketches of the painting, instead I work straight onto the canvas – the
computer process is this stage for me – and I never use a projector as I’m often asked.

What was your reasoning or inspiration for the themes currently in your work?
My paintings have evolved into what they are now over the last 7 years. They started with
paintings that were simply of girls swimming in water into paintings with meaning and narrative
behind them. I captured my first images in Tuscany in 2003 when I was travelling there with an
Art Scholarship I had received. Over the years my colours have gotten more intense and this
has always been inspired by the places I have travelled to and the light they have there. The
narratives have always been inspired by my thoughts and life happenings.

What does the water signify to you?
I love water, but to be honest, I’m a little scared if I can’t see below the surface. I think this is the reason my paintings have such clarity to them!

Does obscuring the female figure with it mean something to you?
The female figure is a very sexual form as it is and the water has led me to explore it in so many
interesting ways. It has allowed me to accentuate parts of the body that interest me whilst also
allowing me to conceal certain areas when so desired. I can play with the figure and abstract it
as much as I want and it still all makes sense.

Who and or what do you consider to be your influences in your work?
Jenny Saville and Francis Bacon have always greatly influenced me. I have always been so
inspired in particular by these 2 ‘very different’ artists for the reason that I am so intensely
fascinated by the figure and flesh. Jenny Saville paints flesh in such a delicious and voluptuous
way that you almost want to reach out and touch her paintings. You feel that she is using her
canvas as a surface to section up and dissect her bodies with lines and contours. Francis Bacon
in contrast creates the appearance of decaying flesh in some of his works – especially his
carcass paintings which I love the most – along with his bizarre animalistic paintings in which
you can’t quite distinguish what they are. His almost aggressive approach to the paint hitting the
canvas really intrigues me and entices me to look at his painting even more. His compositions
are just exceptional and the way he creates his masterpieces look almost effortless.

What is next for you? Exhibitions? A new series? Crime-fighting?
My next Solo exhibition opens on March 10th 2011 at ‘Collectors Contemporary’ in Singapore.
The Gallery are flying me out for the show so I am hoping it will be a success?!?

I have recently been painting Chickens underwater so this is a new route I have taken. Crime-
fighting? Do I get to wear an exciting reflective uniform and carry a truncheon around?

If you were to have any superpower, what would it be?
I would definitely ask the superpower fairies if they could bring me the power of Teleportation?
That would come in really handy when I needed to get some water images as London’s a bit grey
and it costs a lot to travel to hot places all the time. Can I be really greedy and ask for Telepathy
on the side? I am really nosey and would love to know what people were thinking and what
they’ve been up to that they don’t want anyone to know 😉

If you could go back in time and talk with the 15 year old version of yourself for 15 minutes, what would
you say?
I am a strong believer of ‘what’s meant to be will be’, and for that reason, I would let my 15 year
old self carry on with what she was doing then. All the knocks and mistakes in life just make you
stronger. Taking these away would encourage a greater fall later on in life.

Are you afraid of sharks?
Let me tell you 3 interesting facts about Sharks.
1. Sharks attack more men than women. Men are obviously more tasty?
2. The dwarf shark is as small as your hand – so I doubt he’s too intimidating?
3. More people are killed by bee stings than by shark attacks. In fact – I’m allergic to Bee
stings so I am more scared of them. 3 years ago I got stung in the middle of my forehead
and my eyes closed up and I looked like Quasimodo on a bad day.