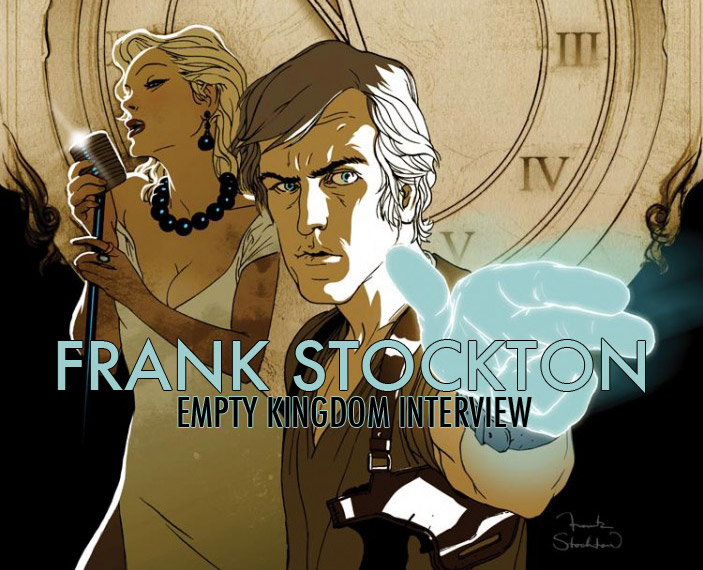 Frank Stockton, previously featured here is an awesome artist.  He was decent enough to give us an interview, it follows. Read it, consume it, devour it, learn from it. His words are some certified grade A prime rib high quality type utterances.  Unless you’re vegan, in which case they’re flank steak.

I grew up in Southern California, to be more specific, in Riverside and Orange counties, and to be more specific than that, the places that I called home were Corona Del Mar, Newport Beach, Lake Elsinore, and Winchester. My parents were divorced and struggled a lot financially growing up so I moved around a bunch as a kid. 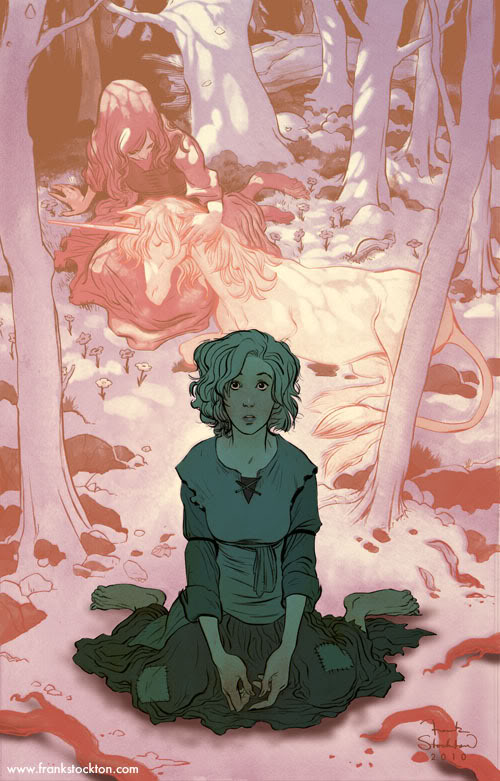 It’s impossible to say how it manifests itself in my illustration. I always loved comic books, animation, and old master paintings as a child. My grandmother gave me a huge book called “Paintings in the Uffizi and Piti Galleries,” that I used to flip through almost daily. I think that all that stuff finds its way into my work in different ways, some more obvious than others. I can’t say if the work would be different if I lived anywhere else, any more than I can say it would be different if I was a different race, gender, income level, or anything else. I would assume that it would be though. 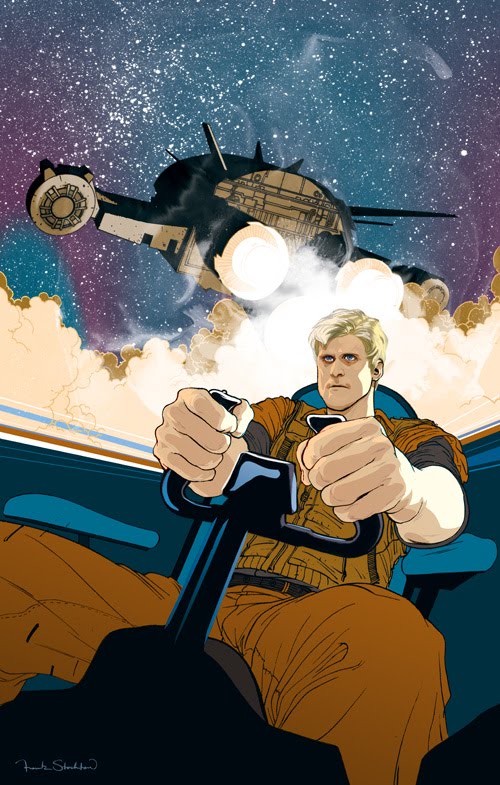 Who were your inspirations when you were young?  How is their influence exhibited in your art?

The artists who influenced me as a kid are definitely present in my art & illustration. The three biggest pre-college people were probably Norman Rockwell, Chuck Jones, and Jim Lee. I don’t consciously take from them, or anyone else, but hopefully you can look at those artists and see commonalities.

How does your environment and current personal standing play out in your work?  What different effects will a specific emotion have on your work?

Well, we’re talking about illustration here, because I don’t currently exhibit paintings and personal work at this time. The way I would answer that is, it’s a necessity of the profession to be able to “turn it on” when you need to. For me, emotion plays a huge role in my illustrations. At the core, I’m a storyteller, and emotion is the most important thing in any story, before plot, characters, etc. So, whatever I do, I try to “act” the proper emotion in the piece. It’s the only trick I know to really do a good job on any given piece. 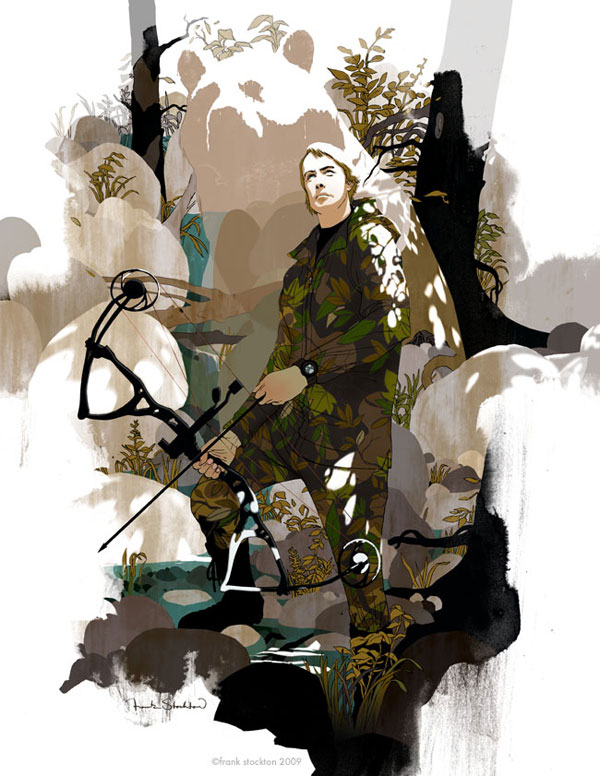 Sometimes I listen to books on tape, sometimes to music, sometimes I prefer silence. Being alone in a room every day for several hours on end, I’ve noticed that my taste to shift gradually from week-to-week. Most recently I’ve read Dostoevsky’s Crime and Punishment, and Kafka’s Metamorphosis on Audio Book. I got into them through reading about a painter named Philip Guston whom I admire, and Kafka and Dostoyevsky are both authors whom he says greatly influenced his artwork. If it’s music, I listen to a lot of Animal Collective, Elvis Perkins, and Radiohead. If I’m doing a piece I’m really excited about, or with a lot of storytelling, I’ll listen to music that will put me into the right mood to execute. An example is the “Luke’s Destiny” screen print that I did with Mondo Tees about a year ago. For that, I wanted an epic, dark emotion, so I listened to the “There Will be Blood” soundtrack while making the drawing. 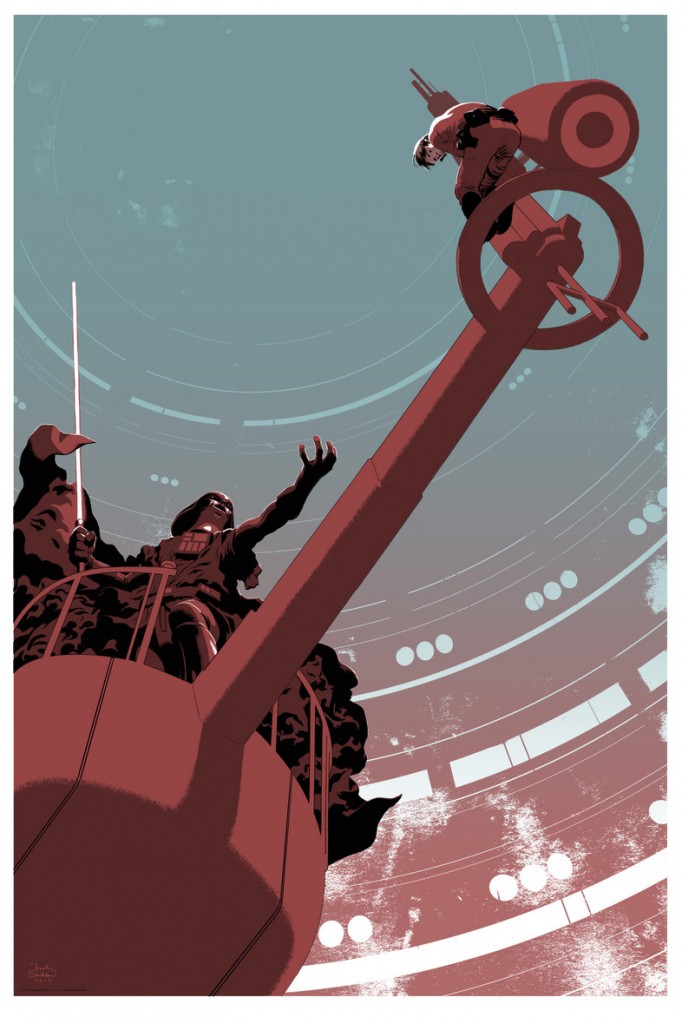 What’s the story behind “Bad Blood”?  What’s were the events leading up to the scene?  Was there a resolution?

“Bad Blood” was an illustration for Intelligence Report magazine, which is a periodical that monitors hate groups in America. I think it was my first spread, actually. The story was about a young girl named Amanda Crow who was a skinhead. Basically what happened is that her group of skinhead friends started committing crimes, and she came to her wits and reported their activities to the police. Shortly thereafter, she was brutally assaulted by her former friends, and left alone in the desert to die. But she didn’t die! For this illustration, I imagined what it would be like for her waking up the following morning, having been stabbed and nearly beaten to death, and what it must have been like to see the beauty of nature while in that condition. Something really struck me about the contrast between the utter violence of the scene juxtaposed with the majesty of nature. Conceptually, I was probably inspired by the last shot in the film American Beauty. 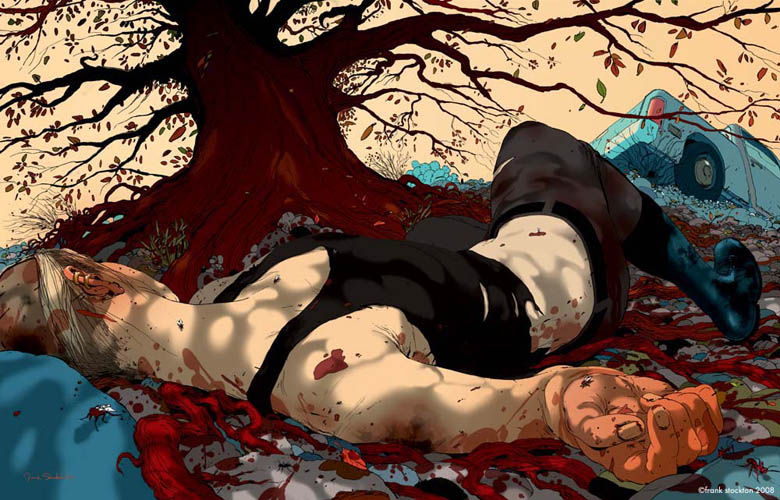 I’ve chosen leave that one up to the viewers to piece together. What I like about “The Legend of Yuki-Onna,” in particular, is the ambiguity. 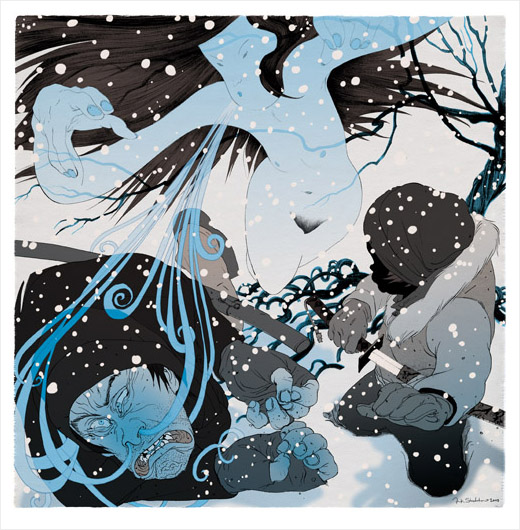 Tell us about your approach and process for “Bug”.  What were you feeling emotionally when the idea came to you?

“Bug” was a piece for a movie review of the film “Bug.” I am not sure where the idea came from exactly, but I watched the film over and over, and that was the solution that seemed like it most communicated the emotional content of the film. It was a fun, challenging piece to make. 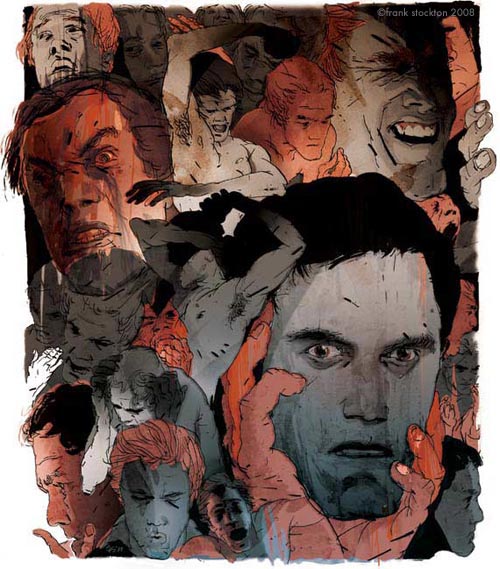 How has your experience with different art directors been?  What would you say makes a good art director?

Each Art Director is a beautiful and unique snowflake, and there are a lot of different styles. Some personalities dance easily with mine, some seem to be off my rhythm. The quickest way for an Art Director to get off on a bad foot with me is to give a detailed suggestion of what to draw. Even if it’s better than the solution that I might have come up with, I won’t want to do it, because the idea feels “dead” to me.  Last week, an Art Director actually sent me a photo comp of what she had in mind for a spread, so I had to turn it down. Bad Art Directors micro-manage, or try to bend the illustrator to fit the idea they had in mind. Good Art Directors let the illustrator be the star, and get out of the way as much as possible.

How have you and your art benefitted or suffered from working with different art directors?

The quality of my illustrations is definitely affected by the person I’m working with. Even if it’s a quick, silly illustration job for an Art Director who is really cool to work with, I’ll want to give them something fantastic to publish. Other Art  will never get my best effort, because I know he or she will want to get hands on it anyway, and nothing is sadder than watching a bad Art Director strangle a good piece until it’s dead. 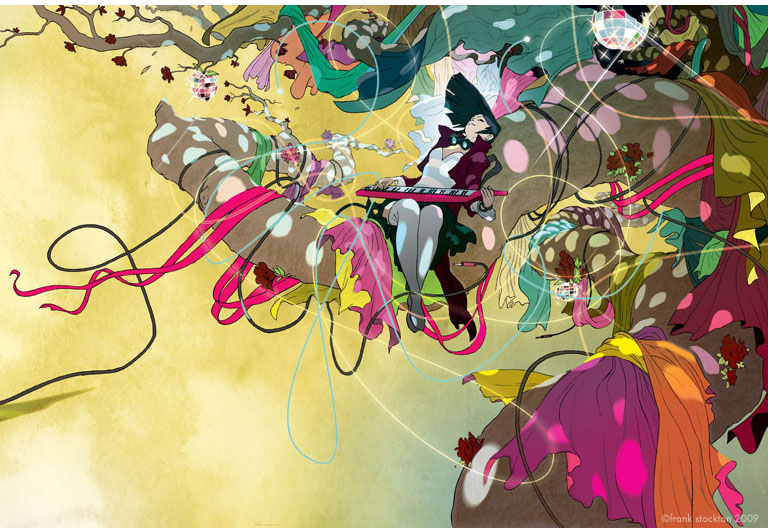 What has been the most rewarding series you’ve worked on and why?

I don’t really have a series. Every piece is kind of part of the same series of my illustration. If you line them all up in a row, it’s like all the pieces equal one continuous illustration. It’s interesting to see how things change gradually over time.

What are your plans for the future?  What’s a project that you’d like to work on?

What keeps me going right now is painting. After making hundreds of illustrations, I don’t usually have a lot of mojo for doing commercial collaborations. So, most evenings, I’m locked away in the studio, wrestling with oil paint on giant canvases, trying to create Art that’s the opposite of everything I’ve been doing professionally for so long. Painting is something that I know I’ll be sticking with for the rest of my life, so I’d like to have a show or two before the end. 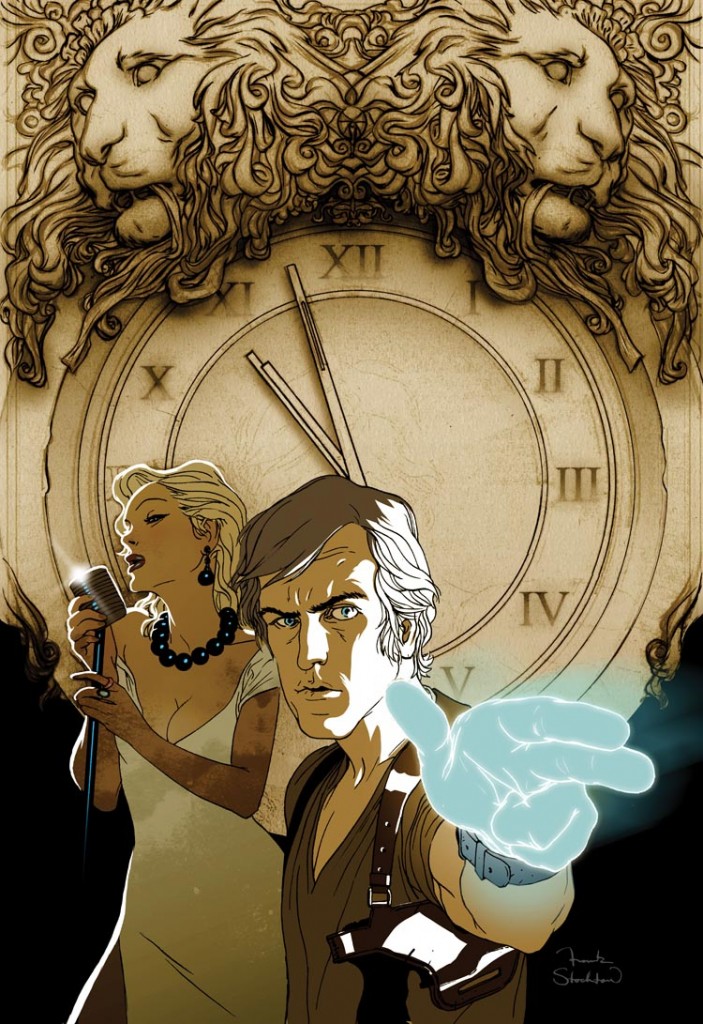 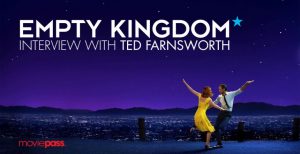 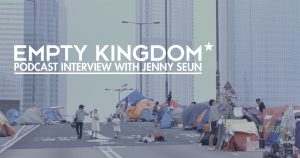