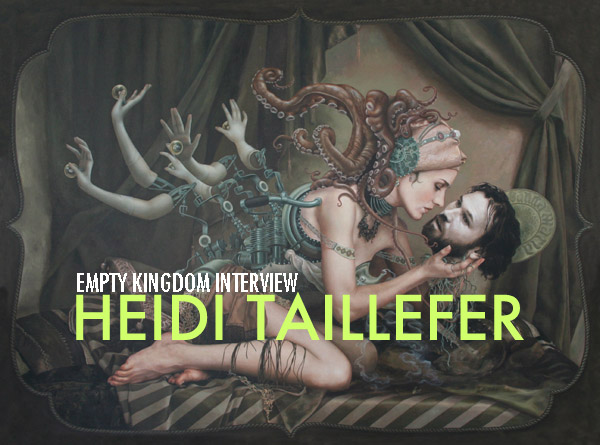 I’m going to cry myself to sleep tonight because I’ve read this interview and fallen in love with how absolutely awesome Heidi Taillefer is.  And she has no idea who I am.  Don’t judge me until you’ve read the interview yourself.  She hijacks government vehicles, she drives Infinity sports cars, she punched the indomitable snowman in the face.  And only one of those statements was untrue.  Read on if you doubt me:

Where is home?  Can you tell us one really good memory?

Montreal.  One really good memory was managing to get set up on a routine military flight via a Lockheed Hercules when I was 23 and going to the Galapagos islands on a trip I put together myself. I heard there was a way to fly there for free if you were a research student, so I forged university papers with someone who was actually doing a PhD at Exceter University in England, pretending to be their assistant.  We went to the Airforce base in Quito and spoke with whomever was in charge of taking such inquiries, and we were given a one-year open round trip ticket to the Galapagos. They do routine military flights every two weeks so we jumped on one and off we went.  And maybe also learning that I was chosen for the first Infiniti art car contract, while I was on the beautiful island of Hvar in Croatia, and a five hour business lunch with Richard Mille luxury watchmaker at the Hotel Meurice in Paris. 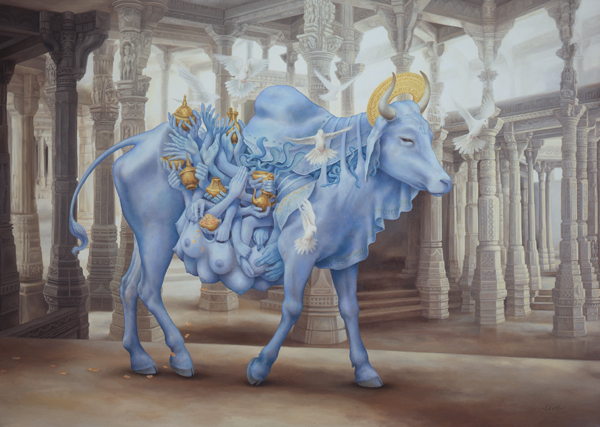 What did you study at McGill?

Humanistic studies, which is like a liberal arts degree. You have to specialize at some point in the program and I was studying Spanish, German, Philosophy, Psychology, Music, History, Political Science, Law, Ancient Greek Literature, it was pretty broad, and I was ended up focusing on German translation. 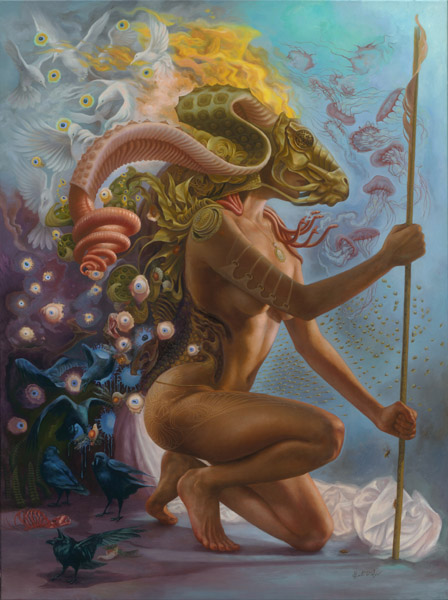 How do you think your time at McGill has benefitted you as an artist, what did you learn there that you do not think you would have elsewhere?

I never studied any visual arts there, but the range of subjects I did study I incorporate into my work. I can reference something I know of and do further research elsewhere, and I think a broad range of subjects would best benefit any student whether it’s in business or law or accounting, whichever, because the more legs we have to stand on the mode adaptable and adept we are in one field of expertise.

I’m not sure if I couldn’t have learned the same elsewhere, I didn’t go far enough into my studies for it to make a huge difference. I know that I would have gone elsewhere to pursue a fine arts degree however their program really doesn’t specialize much in that. I really liked my time there though, the one criticism I have is that universities don’t seem to be as set up to encourage students to really come up with their own work, there was a lot of paraphrasing being done by some of the history students which got them great marks. Whereas I would read then write up my own independent paper on whatever subject we had, and I’d get lower marks. However, in other classes like psychology, where you had to work with more abstraction and a greater problem-solving rational, I did the same and got far better marks and I think that exercise of having to figure out one’s own solutions is what university should be about. Not providing answers that fit the required template, as many a student has lamented.

In what ways did school challenge you and push your limits?  In what ways have you personally challenged yourself?

It forces greater critical thinking, and discipline if you are to keep up with the required reading and work. As for personally challenging myself, it’s a constant feature whether it’s heading off on a trip alone somewhere to some developing country, or working to achieve career success in the various directions it can take me. My life has a lot of movement and drama at times, and just surviving the game has been it’s own challenge at times. Right now I’m focusing on meditation in order to control what happens around me, we all conjure up our circumstances to some extent beyond what fate has in store, and it’s too easy to get caught up in the fray that never seems to stop for long for me, so I need a tool to navigate it more smoothly, and not just draw in more of the same. 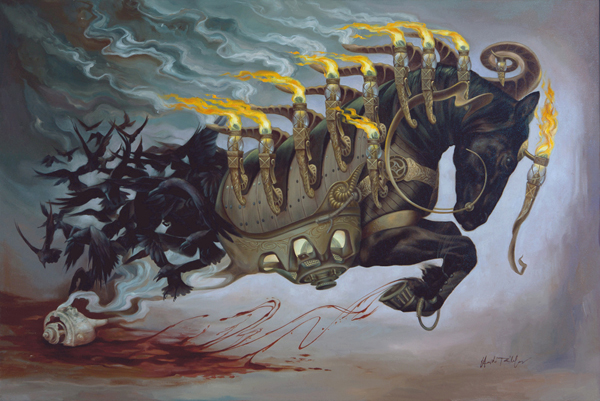 How can aspiring artists push the limits of their own work?

Never be entirely satisfied but never be so critical that you stop, and be open to positive or constructive criticism which can be hugely beneficial. Even destructive criticism and attacks from whatever source can be beneficial if you can separate your ego from it and improve, then throw it back at whoever dared do such a thing.

What were you doing while working for Cirque du Soleil?  How has that job challenged you as an artist?

I have only worked on freelance or independent projects, but it’s been for 12 years now. It started with Dralion in 1999, then a few fine art sales/commissions for Guy Laliberté and the Cirque as well. I was invited to put on a show at their international headquarters in 2005, and there were other fine art purchases in between. Then there were two Infiniti art car contracts in Canada and Taiwan, alongside a commission to produce 25 illustrations representing the first 25 shows of the Cirque for their 25th anniversary. The Dralion and Infiniti contracts were like feats-of-strength challenges but with art. After the initial briefings the process was full of obstacles, time constraints, technical challenges, etc… I worked for 10 days straight on 4 hours sleep with Dralion, then I spent 300 hours during the 5 weeks to complete the first Infiniti art car, and I had a 4 day window in which to prepare the design and bring all the materials/tools like paints and airbrush/air compressor, to be flown to Taiwan. Then I had 11 days to complete an entire car that took 150 hours this time, while working on their corporate time schedule in spite of jetlag. Taipei has the best food in all of South East Asia incidentally. 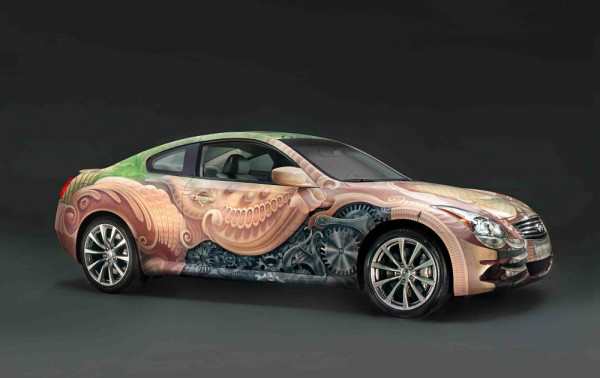 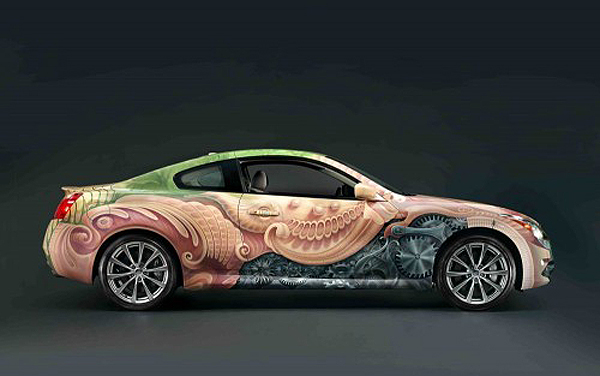 Did the job resonate with you?  What kind of artistic freedom/direction were you given?

Each of these projects resonated with me, I don’t know if there’s anything which wouldn’t since they we seem to be tailor made for each other in a way, though what I do is different from the usual Cirque aesthetic. They give you almost 100% artistic freedom because they want your style as an artist, unless it has to fit certain technical parameters like advertising, in which an image has to incorporate certain things to help market the show. Dralion was tweaked to become friendlier; it was more serious and dramatic maybe even menacing looking in its initial development.

How does your own personality manifest in your work?  What pieces can you point at and say “right there, that’s me”?

All of my work is a manifestation of my own personality; it’s like a kind of handwriting or way that one walks. Not all artists paint about their experiences or observations, so because I am putting to canvas what moves me in life philosophically and not just aesthetically, it’s a manifestation of who I am. It’s also very cathartic so some of the images are the catch-all for the dramas I experience and it helps keep the rest more level. I think everyone should have some kind of non-verbal creative outlet of expression, writing, music, art, even if it looks or sounds terrible, keeping pressures bottled up is the fastest way to become warped of mind. 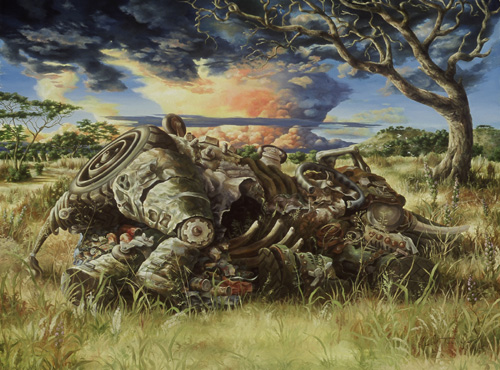 What about you is predominantly represented in your art?  What part of you is under represented?

The last 5 or 6 years has been philosophical questions or observations about life in general, and I think what is underrepresented now is the interest in where technology is taking us. Which by now to me is really at the ultra miniaturization of things not just bio mechanical fusion, so I’d like to go more abstract and depict nanotechnology in the next phase of art. 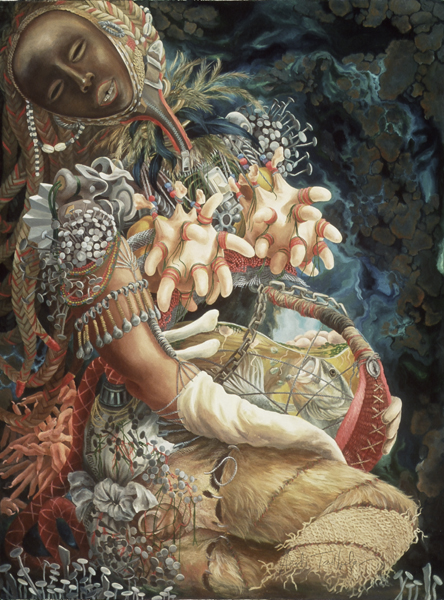 Can you name three influences and what you have learned from them?

I don’t know what influences I have…the obvious ones were from growing up but they hardly count these days. My influences are the myriad things I see every day around me, but I really like the work of Oliver Vernon and Mars 1. I’d be inclined to be influenced by that effect in future works but I don’t want to leave what I’ve been doing entirely either, just go for more abstraction if I can. I don’t think it will be easy because it’s like trying to adopt a new speech inflection and sustain it permanently.

Do you listen to music while you work?  If so, what?

I listen to my neighbors music at times, we share the same wi-fi network and I’m plugged into his iTunes library. We both love electronica, and jazz, classical, I like a lot of music and it’s too much to list here. I also listen to radio shows at night especially, and a show on CBC2 called the Signal which showcases a lot of independent underground music. 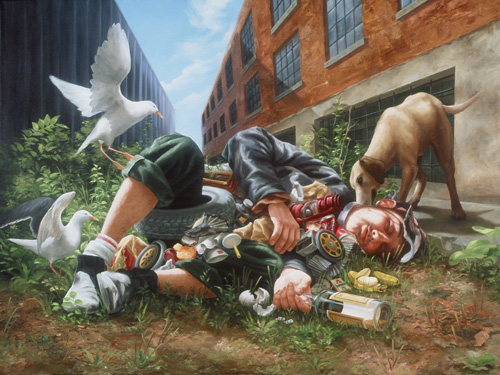 What are you currently working on?  What does the future hold for you?

Right now I’m working on sculptures of dolls on the theme of Eros. So it’s the same doll but represented as a variation of itself for better or worse. Love is considered to be a single entity so to speak but it has so many different manifestations that masquerade as the real thing. So these cover some of the spectrum, but the idea is to highlight that it’s never true love. There is something forlorn and sad about it all, but also funny, it’s also just an objective observation of things.

If you could only eat one kind of cuisine for the rest of your life, what would it be?

The food offered up in Taipei, it’s a mix of the best of all that is to be found in Asia. 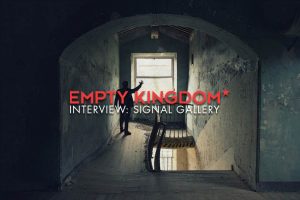 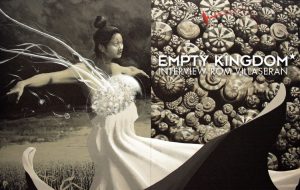